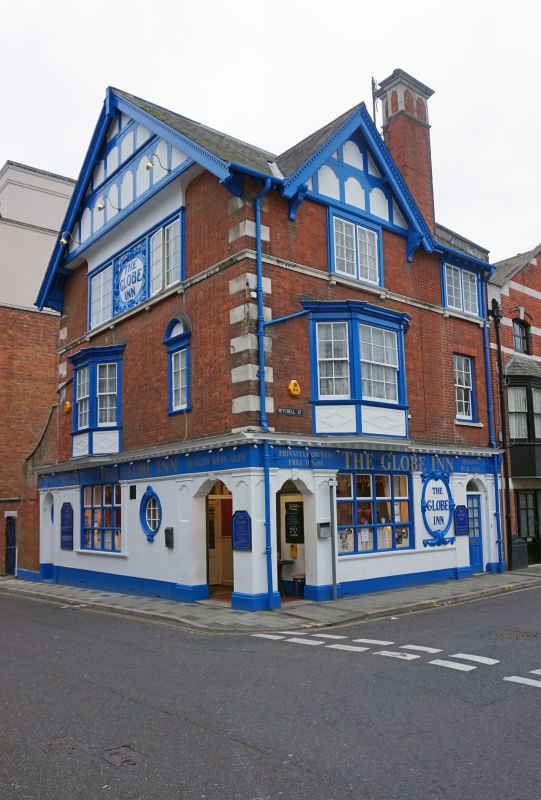 Hotel. c1900. Flemish bond brickwork with some stone
dressings, slate roof.
PLAN: almost square in plan, with attached service yard to the
left. The broad gabled roof faces East Street, and the return
to Mitchell Street has an eaves roof with a bold central
gable, in late Queen Anne style.
EXTERIOR: 3 storeys and attic. East Street front has a central
unit embracing a 2-light small-pane casement each side of a
strapwork plaster panel inscribed 'The Globe Inn' to a moulded
sill band, under a coved head to the projecting gable with 2
ranges of arched decorative framing with plaster infill, and a
barge-board with dentils. At first floor there is a canted
oriel with 8:12:8-pane sash with pilaster mullions to moulded
cornice and on a deep skirt; to the right is a 6-pane light in
pilasters, under a curved moulded pediment. Flush stone quoins
alternate with brickwork at each corner.
Ground floor has a full-width bold modillion cornice over a
deep fascia bearing 'The Globe Inn' in raised lettering, above
a wide paired plate-glass window with a transom, in pilasters
and to a moulded sill, and an oculus in decorative scrollwork.
To the left is a lofty part-glazed door under a plain
fanlight, and in pilasters, on 2 stone steps. To the right is
an open arch with panelled pilasters, segmental head and
keystone, with doors set back in the re-entrant.
Above the door to the left a high coped wall sweeps down and
drops to a lower straight-topped yard wall containing a plank
door with a flush chamfered lintel; the wall terminates in a
brick pier to the left.
The return to the left is plain, with various small and large
4-pane sashes, and a tall brick stack at the eaves, with a
moulded capping above arcuated frieze in flush stonework. A
slated lean-to returns to a small carriage house across the
yard from the boundary wall.
The front to Mitchell Street is detailed as the main front,
with an off-centre wide gable above two 2-light small-pane
casements to a continuous sill band. The gable above is flush,
but with timber and plaster embellishment. At first floor is a
canted oriel as to East Street, and a 12-pane sash in reveals,
with brick voussoirs and a stooled stone sill. Ground floor is

similar to the East Street front, with the arch to recessed
doors, a 2-light casement with transom, a decorative plaster
panel with 'Globe Inn', and a part-glazed door under a flat
fanlight. To the right of the front gable is a stack detailed
as the other. The right-hand gable is raised and coped, with
some slatehanging.
INTERIOR: altered to ground floor.
Included for its townscape value and the quality of its
external detail and design.