Education Offices, Downhills School and Railings and Walls to Front 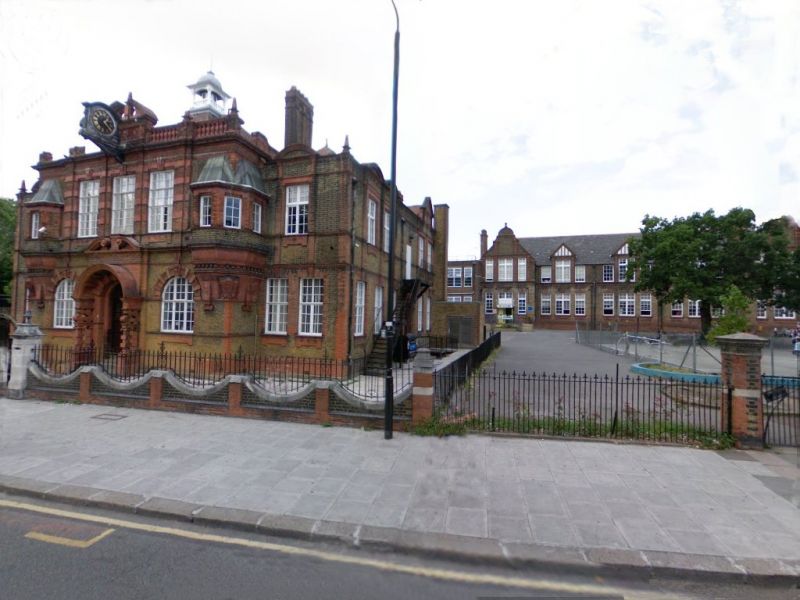 Headquarters of the Tottenham School Board. 1899-1900, almost certainly by Albert E
Pridmore, architect to the Board. Brick and terracotta, hipped slated roof with tall stacks.
Square building of two storeys with a symmetrical though lively facade. Main facade has
projecting five-bay centrepiece with broader single-bay wings and recessed entrances to
sides. Ground floor of centrepiece a vigorous design with central panelled door with
toplight in lavish round-arched and projecting doorcase of terracotta with Jacobethan
details. Round-arched windows to either side under terracotta Gibbsian surrounds, with
smaller toplights to tripartite casements. First-floor sill band level with swan-necked
pediment over panelled red brick ind doorcase. First floor with central three windows
having small panes to their casements, set under keystones and within bands of terracotta
decoration. Corner oriels to either side particularly lavish in their use of terracotta, with
scroll mouldings and small paned casements. Terracotta balustraded pediment with brick
piers, heavy cornice and broken segmental. pediment from which projects a clock. On
apex of roof an open timber cupola. Wings to either side with terracotta bands, the two
windows either side on ground floor with keystones, the larger single windows to first
floor under segmental pediment. This same treatment continued on side elevations. Doors
to either side six-panelled in pedimented door surrounds. To front, railings on dwarf,
segmental-dished walls with contrasting brick piers and stone gatepiers a part of the
composition.
Source: Victoria County History, Middlesex, vol.RV, 1976.T