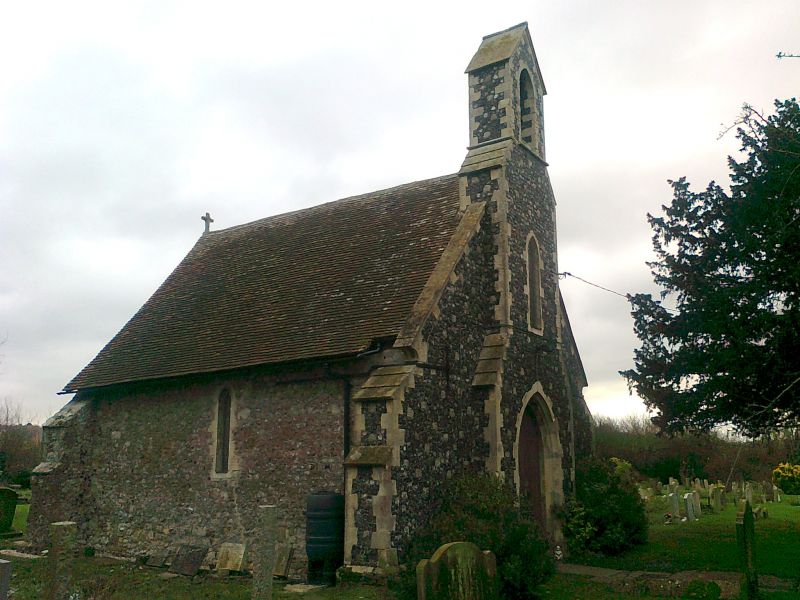 Exterior: west front is entirely of the 1845 build, with wide gabled end buttresses and an advanced central part with pointed arch door below a lancet and a raised belfry. The stone is loosely arranged in a chequerboard fashion and the quoins contribute to the patterned effect. North wall has some pink ironstone amongst the ragstone, all rubble, and has single lancet in the centre of the wall; deep buttress to north east corner. East end shows a curious assortment of rubble and reused stone, all exposed; central window of three simple modern lancets; substantial lancets to each end. South wall is similarly ragstone rubble peppered with flint, and deep buttresses at the south east corner; south wall has two single lancets

Interior: a very small and modest interior. East window set in wall with splayed cill and exposed ragstone to arch. Piscina has ogee arch. Timber panelled dado to east end. Pews are Victorian and south wall has two deep splayed window surrounds for the single lancets of simple coloured glass; to centre is what appears to have been a door but with no evidence on the outside wall. West wall has deep set window with single lancet coloured glass window of St. Alphege over doorway with depressed arch. Marble monuments to Sarah Hyder of Court Lees d.1836; Elizabeth Eagleton d.1835; Captain William Augustine Ryder d.1842.

History: The dedication to St. Alphege, the Saxon archbishop, is an unusual one nationally and especially associated with Kent. St. Alphege was murdered by Danes at Greenwich and brought to Canterbury Cathedral in 1023. The church on this site was first built in the late C12. By the 1840s, the church was in a poor condition and it was decided to build a new St. Alphege's church in Whitstable. The nave of the medieval church was pulled down and the chancel was made into a burial chapel. This new work was done by H. Marshall and the new building was consecrated on 9 October 1845. The church is now surrounded by mid C20 housing and occupies a high point on a hill set in an open churchyard with mature trees.

Reasons for Designation
St Alphege's Church, Whitstable, is designated at Grade II for the following principal reasons:
* Early English fabric from the chancel of former church constitutes fragmentary medieval survival of special interest;
* The 1845 work by H. Marshall is of interest an early Victorian refronting for the church's continued use as a burial chapel, also of attractive flint and stone in a chequerwork pattern