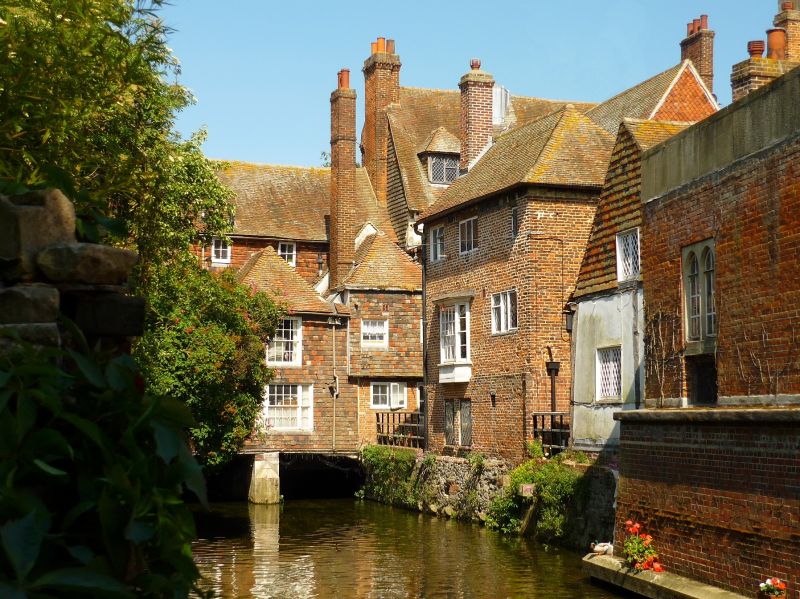 2.
Founded in 1180 for the needs of poor pilgrims to the shrine of St Thomas
Becket. Restored 1927-1832. 12 pilgrims were accommodated here each night
and were charged 4d for board and lodgings. In the C14 a chantry chapel
was added, and after the Dissolution the building was turned into almshouses.
The exterior is built in 2 portions. The left side is 2 storeys high faced
with knapped flint and having stone quoins. Tiled roof with crenellated
parapet. 3 early Perpendicular windows with reticulated tracery set in stone
surrounds. 4 arched C14 door set in an earlier round-arched C12 door. The
right hand side is a timber-framed building but with an early C19 facade
to the High Street. 3 storeys red brick with crenellated parapet. 4 lancet
windows, some double, some triple with diamond panes. Brick plinth. The
rear elevation of this part is C17 and tile humg. 2 to 3 storeys with a
slate roof in hips and restored sash windows. The hall and undercoft date
from about 1180. The undercroft was originally the dormitory and is groin-vaulted
It is 5 by 2 bays on short round piers with round ball caps and moulded bases.
This is a form which was first introduced in 1179 in William the Englishman's
crypt. There is C13 mural on the north wall of a seated figure of Christ
in an almond-shaped surround with the symbols of the 4 Evangelists. The
south wall has late C16 painted panels with strapwork and shields of arms.
The chapel upstairs has a fine crown post roof.