Chapel of St Luke at Stone House Hospital, Built As the City of London Asylum 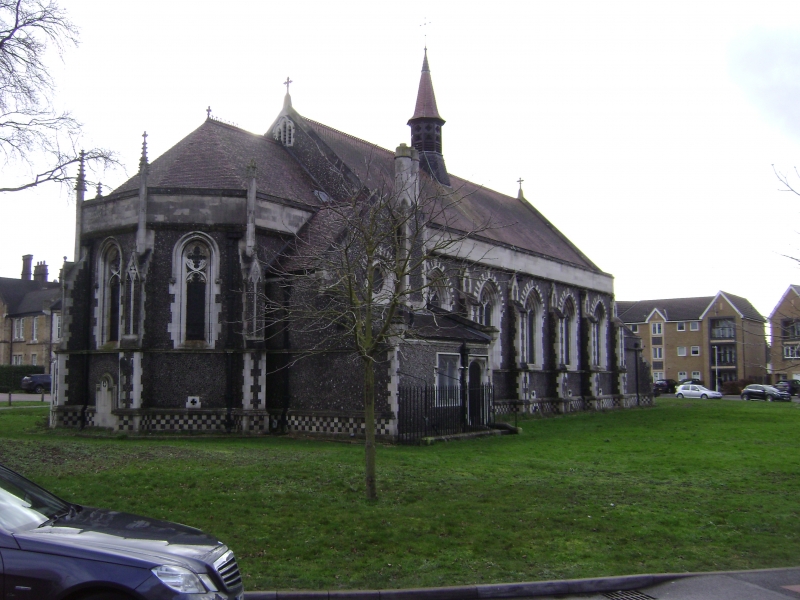 MATERIALS: Local knapped flint with brown Portland stone dressings and quoins. The plinth is a chequerboard pattern of flint and stone in small squares. Pitched slate roofs to porches and slate to body of the church, both with terracotta ridge tiles.

PLAN: Aisleless church of five bays with polygonal apse to east, and a pair of separate entrance porches to west, these to segregate access for males and females. Situated to the north of the hospital site, and in front of the main, north entrance.

EXTERIOR: West front features a window under pointed arch with C14 tracery, this set below a single oculus. Advancing from this is a pair of porches to right and left, with linking shallower range, these all of a single storey. The porches each have a pair of angle buttresses, a wide moulded and shallow pointed arched opening within which are double wooden doors, and a small lancet in the gable. Linking range has a pair of lancets and a central buttress. To south west corner is a tall octagonal bell turret with buttresses and louvered lancets to upper stage and a steep conical roof; this tower, in contrast to the rest of the building, is largely of stone with flint dressings. The north and south walls have 5 wide windows under pointed arches with alternating stone and flint dressings; each has a pair of ogee headed cusped lancets with elongated quatrefoil above; buttresses with stone quoins between each window. Ridge features a central wooden flèche with quatrefoil openings and steep tiled roof. South side has vestry with stone chimney that has a pair of tall stone stacks. East end has tall apse with polygonal end, this with stone frieze, crocketed finials, and nearly pointed lancets with elongated quatrefoil over lancet. Foundation stone plaque at base of apse.

INTERIOR: Separate entrances each have a door to separate rest rooms in the west end. The body of the church is aisleless and all one space, save the chancel. Timber arched brace trusses on brackets with trefoil punctured spandrels. Moulded stone chancel arch, rounded but with subtle point like exterior openings. Chancel is panelled in alabaster, richly fitted out to surround each windows and fill the dado with elaborate reredos with crocketed finials. Stained glass windows by Heaton, Butler and Bayne. Pews are original, simple wooden pews.

HISTORY: The original chapel of the City of London asylum was in the upper floor of the main block, above the kitchens. It was decided in 1895 to convert this to a recreation room with a stage, as entertainment was regarded as an important method of improving the lot of the mentally ill. When the site underwent modernisation and extension in 1897-1903, Andrews Murray, the City's surveyor in this period, designed the chapel as well as other significant additions such as the male infirmary and female hospital and other improvements. The chapel was described as 'an ornamental and pleasing object' in the 1902 asylum report. It was consecrated by the Bishop of Rochester in May 1901.

SUMMARY OF IMPORTANCE: A well surviving asylum chapel of 1898-1901 by the City of London Surveyor that makes an important contribution to the architectural and social history of this interesting site, built as the City of London pauper lunatic asylum. The flint walling is fine and the Portland stone dressings used to dramatic effect, particularly in the chequerboard plinth and in features such as the bell turret. The plan form identifies it as an asylum chapel since the pair of entrances and rest rooms separated male and female patients, and provided a separate rest room at the front. Furthermore, the interior features an arched brace timber roof and a richly panelled alabaster chancel, as well as the original plain pews. Finally, it groups well with the impressive hospital complex, which is separately listed at Grade II.