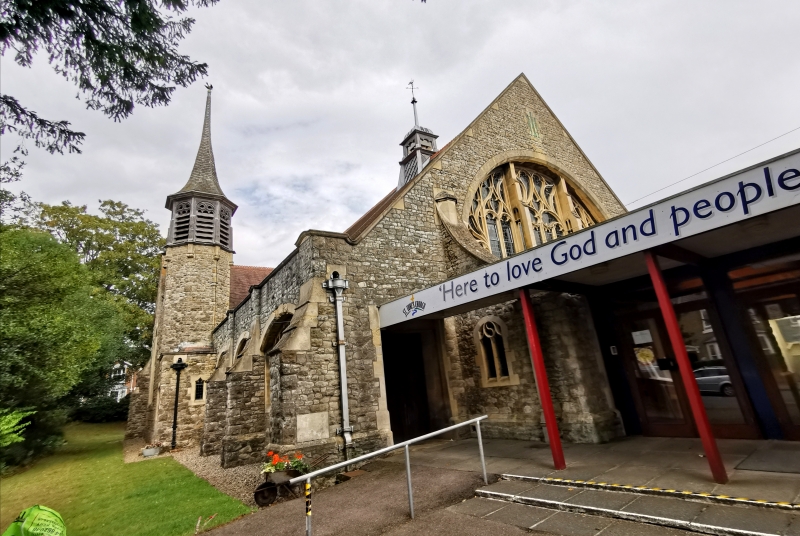 PLAN: Nave, chancel, N and S aisles, N transept/organ chamber, N and S vestries, octagonal turret (N). (The church is oriented to the NE and all directions given here are liturgical).

EXTERIOR: St Luke's is built in Free-style Gothic of a kind popular at the end of the C19 but more often associated with nonconformist chapels rather than Anglican churches. The principal façade is on the N where there is a large catslide roof covering both nave and aisle. The aisle has a plain parapet and is divided into bays by buttresses with offsets and broad windows which span the entire width of the bays: they are of four lights and have freely-treated Perpendicular tracery under depressed heads. In the angle of the aisle and N transept/organ chamber is an octagonal turret with a timber top stage which is capped by a concave-sided, shingled spirelet. The transept/organ chamber has a five-light N window with inventive tracery fusing Perpendicular with Kentish-style tracery of the early C14. The chancel too has an inventive E window with a pair of thick mullions dividing it into three lights and with an Art Nouveau interpretation of Perpendicular in the tracery. The S elevation of the nave and aisle is similar to that on the N. Towards the W end of the nave a small lead-covered cupola straddles the roof. The W window is broad and, with its pair of thick pierced mullions, derives from the large E and W windows in churches by Norman Shaw and J D Sedding and combines Perpendicular and Decorated details.

INTERIOR: The walls are plastered and whitened. Between the nave and aisles there are unusually treated three-bay arcades. These have round arches with fleurons placed round a hollow moulding and pairs of square capitals to pairs of round columns set on a high rectangular base. The capitals have stylised foliage at the corners which taper down through inverted half pyramids into the piers. The stone carving in chancel is by a Mr Aumonier and in body of the church by Gilbert Seale. The chancel arch too is round and is carried on semi-circular responds. The nave roof is arch-braced to a collar which carries a crown post and raked struts; in the tower lower tiers of the roof are short, curved wind-braces. The aisle roofs are plain lean-tos. The chancel has a semi-circular ceiling divided up into panels. On the S side of the chancel is an attractive mural of c1918 by Ivor Hutchins depicting the Tree of Life, Garden of Eden etc, in the style of Italian quattrocentro artists.

PRINCIPAL FIXTURES: Although the original seating in the nave and chancel has been almost entirely removed, there are still some fixtures of interest from the late C19 and early C20. The altar rails are by W. Bainbridge Reynolds and have metal cartouche-like detail. The organ case is particularly inventive and is to Seth-Smith's design with a depressed arch over the console and above this three curved towers of pipes with flats between. The reredos was made by Jones and Willis and was also probably designed by Seth-Smith and has rectangular traceried panels bearing gilded texts. The teak pulpit is in Free-style Gothic with pierced traceried sides and was designed by Seth-Smith and Monro, and dedicated in 1911 (carving by E J Bottle of Harrietsham). The war memorial tablet of 1920 in the N aisle is also by Seth-Smith and Monro. The pulpit is a conventional, plain octagonal piece. A few items of pews and chancel stallwork remain, such as a reading desk with an open traceried frontal but not in their original positions.

HISTORY: St Luke's parish was created out of those of St Paul and Holy Trinity and came into existence on 20 August 1895. The foundation stone of the church was laid on 21 October 1896 and the consecration took place on 10 September 1897. The architect was W Howard Seth-Smith (1858-1928). He had been articled to the London architects Habershon and Pite and commenced practice in 1879. He went into partnership with A R G Fenning and, from 1905, with W E Monro. He was President of the Society of Architects in 1888-91 and of the Architectural Association 1900-2. He enjoyed an extensive practice with commissions in London, Kent, Buckinghamshire, Gloucestershire and elsewhere. The key to his gaining the commission for St Luke's seems to be that he was the son-in-law of Col. H B Urmston, one of the leading figures in the early history of the church. The contractors for the building were G E Wallis and Sons. The site was given by Mrs Whatman and Messrs Fremlin Brothers, the local brewers, contributed generously to the building costs. In 1971-2 the W baptistry was largely demolished and a new foyer and church hall built. The parish lounge dates from 1982. In the early 1990s plans to remove the pews led to a consistory court in 1993. The chancellor upheld the objections but an appeal to the Court of Arches overturned this judgement and the pews were removed and the church carpeted.

The style of the building is unusual. John Newman in the Buildings of England volume covering Maidstone describes it as 'an all-out Art Nouveau affair, expensive, designed with the intensest care for details, but absolutely no delicacy of feeling.' This is rather a hard judgement and his strong emphasis on 'Art Nouveau' as the descriptor has been followed by others, such as Homan. There are certainly features that could aptly be described as Art Nouveau, such as the treatment of the E window and the organ case bit it seems more appropriate to see this as a building in Free-style Gothic of the kind popular around 1900 and used in many nonconformist churches and chapels. It is certainly an eclectic blend of architectural ideas and details.

REASONS FOR DESIGNATION:
The church of St Luke, Maidstone, is designated at Grade II for the following principal reasons:
* It is of special interest as an Anglican church built in Free-style Gothic at the end of the C19, blending a variety of architectural forms and details, and as such is unusual.
* Despite the removal of nearly all the seating which has considerably affected the character of the building, it does still retain some late C19 and early C20 fittings and decoration of special interest, such as the mural.