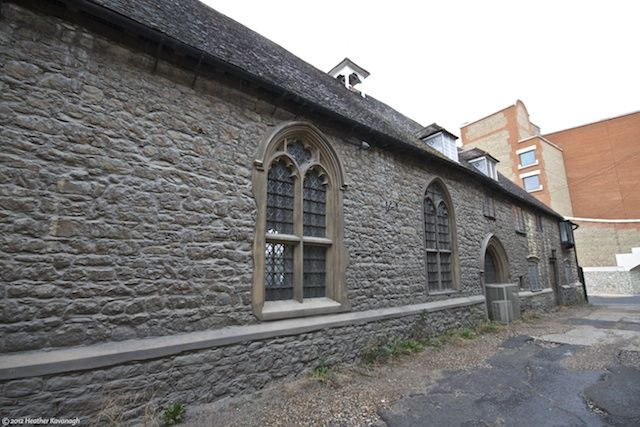 II*
The Guild or Fraternity of Corpus Christi was founded in Maidstone about 1422. It had the use of a chantry chapel in the north chancel of All Saints Church and consisted of two wardens, four chaplains and a number of churchmen, gentry and townmen. The building consisted originally of a Hall, Refectory, Chapel and Cloisters. After the Suppression of the Fraternity, Protector Somerset gave the building to the town of Maidstone for a Grammar School, founded in 1549 and it remained in use as such until 1871. Only the Refectory remains. An L-shaped C15 building. Two storey and attics stone rubble. Tiled roof. The main front faces east. Two hipped dormers. Two pointed windows containing cinquefoil-headed lights with a quatrefoil over, stone mullions and transom. The outer windows are modern. The gable end facing Earl Street is timbered with red brick infilling. The west wing is of stone rubble on the ground floor and imitation timbering above. Two square-headed windows contains three cinquefoil-headed lights with dripstones over.

The interior has two crown posts with chamfered tie beams. Screens passage with five stone arches. Also traces of a wooden partition which originally divided the hall into two. Formerly a Scheduled Monument.