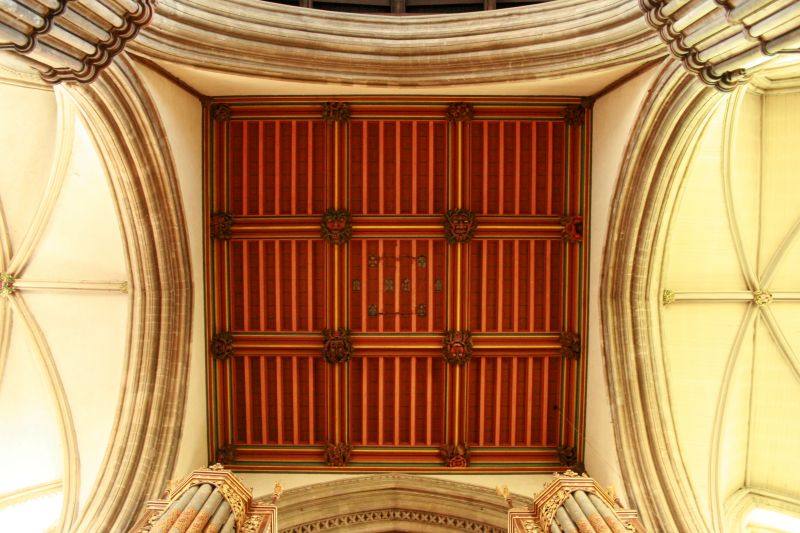 Entry Name: Cathedral Church of Christ and the Blessed Virgin Mary of Rochester (Formerly Priory of St Andrew Was Included)

ROCHESTER,
THE PRECINCT,
Cathedral Church of Christ and the Blessed Virgin Mary of Rochester

Cathedral Church. (For cloister buildings see refs. 9/188 and
9/189; for associated medieval buildings, see 7/187, 7 and 9/199,
7 and 9/200, 9/201). C7 origins (reverted in excavations). Re-
established as a cathedral-priory by Bishop Gandulf and rebuilt
by him (1078-1108); parts of his cathedral survive within the
present walling of the nave aisles along with the formerly
detached Gandulf's tower and parts of the crypt. Mid-C12
rebuilding (W front no earlier than the late-1140s). E end
(including E 2 bays of nave) c.1210-40. Alterations (mainly
refenestration) in C14 and C15. Early C16 Lady Chapel. Major
restorations by Cottingham (1825), Scott (1870s, mainly E end
repairs and internal refurbishing), Pearson (1888, especially the
W front), and C Hodgson-Fowler (1904-5 rebuilding of central
tower). Ragstone with limestone ashlar and dressings; slate and
lead roofs. Nave and aisles of eight bays; Lady Chapel in angle
formed by S aisle and transept, central crossing (with tower),
aisled choir (with Gandulf's Tower to N), E transepts, aisleless
presbytery with library and chapter room to S. Crypt.

The cathedral is fully described and evaluated in Newham (1980, pp.
470-88); detailed descriptions given there are not duplicated in
this account which is cross-referenced to Newman throughout. Of
particular importance note Gandulf's Tower (p. 473): the original
ashlar lining has been replaced in brick but enough survives at
2nd-floor level to confirm the existence of a doorway that must
have led by way of a wooden bridge into the N transept. The nave
gallery (p. 475) is unusual in that it possesses no floor. W
front (carefully restored by Pearson) retains important carving
to the central portal (left untouched by Pearson) influenced by
St Denys of the 1140s. The design of the E parts is of great
interest and quality: the presbytery has no aisles and its
elevation is of two storeys (unique in an English cathedral, Newman
p. 478); the choir is unusual in having solid walls dividing it
from the N and S aisles (p. 479). Not mentioned in Newman is the
library, entered through the Decorated doorway in the SE transept
(p. 479): C15 with wall plate (wavy and concave moulding), C17
(possibly re-worked) doorcase to S, C18 panelled shutters with
HL hinges; fireplace with eared architrave with cyma moulding.