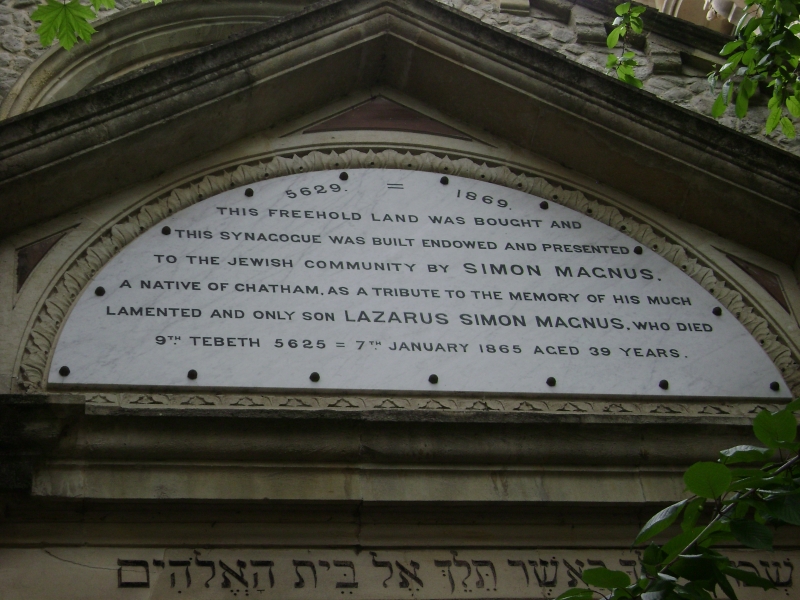 Synagogue. Foundation stone of 1865; opened 1870. Designed by Hyman Henry Collins (1832-1905), architect after the Byzantine manner. Patron was Simon Magnus who rebuilt the synagogue as a memorial for his only son Captain Lazarus Simon Magnus who died in 1865 at the age of 39 and is buried in the adjoining graveyard.
EXTERIOR: Kentish rag-stone with Bath stone dressings; columns and enrichments of red Mansfield stone with floriated capitals; inscribed marble tablet in tympanum. North gable of synagogue with large wheel window. Tower to NW with tall two-light round-arched windows with circular foils, below overhanging cornice with corbel table and gablets, and with spire over. Committee room to left hand, the north gable with windows in round-arched and columned arcading. Side elevations of synagogue have three two-light round-arched windows with small circular foils, corbels and buttresses between. Gabled polygonal south end.
INTERIOR: Entrance vestibule has dedication tablet under enriched cornice with elaborate brackets, doors with engraved glass and multi-coloured Minton tiled floor. Synagogue is of three bays, with arches of serrated ornamental white and red bricks, with carved stone incised enrichments, supported by clustered and coupled columns of red Mansfield stone with floriated capitals and base. Boarded barrel-vaulted roof of deal with quatrefoil band to the base. An enriched semi-circular arch to the south supported on polished red Mansfield stone columns; below, and to each side, a broad flight of steps leads to south end containing the Ark with balustrade connected to carved stone screen with convex recess. Clustered pillars of variegated coloured marbles at each angle of polygonal south end supporting domical ceiling. Enriched doors to the Ark. Minton tile floor. Original wooden pew seating both downstairs and to women's gallery and elaborate ironwork around reading desk and gallery. Stained glass representation of the Ten Commandments over the Ark and stained glass elsewhere by Messrs Smith and Miers, London.
HISTORY: This synagogue replaced an earlier building with an attached graveyard. Original plans of 1865 included a minister's house to the left which has since been demolished. The design left the monument to Captain Lazarus Simon Magnus visible between the two buildings. Copy of architect's drawings displayed in entrance vestibule. This is the only synagogue in the country with an attached graveyard.