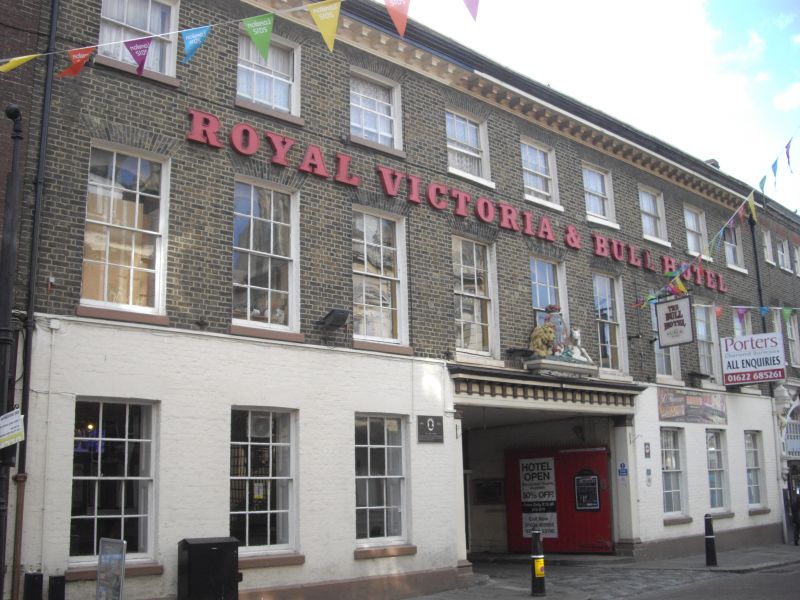 ROCHESTER HIGH STREET
TQ 7468 NW
7/44 Royal Victoria and
Bull Hotel
24.10.50
GV II*
Hotel. Built as a coaching inn in the late C18, the front
extended to the right (NW), probably in the early C19, and with
substantial C19 and C20 extensions and alterations, especially
to the rear. Brown brick in Flemish bond; tiled gable-end roofs.
A wide central carriage entrance enabled visitors to alight
within a covered area on the left giving access to the vestibule,
main stairs and principal rooms, some of which were contained in
a rear wing to this side; fragments of another, smaller, entrance
survive on the right-hand side, possibly giving into eating
rooms; the internal arrangements are now much altered. Front
elevation: the original coaching inn, 3 storeys, symmetrical 9
window range. Prominent 3-bay central coach entrance with
pilasters and dentilled cornice supporting a prominent free-
standing royal coat of arms. Deeply overhanging wooden eaves
cornice with modillions, blocking courses above. All windows
under flat arches, with hornless sashes, 6 panes to 2nd floor,
12 panes to the other floors. Stone cills; plinth. The later
extension to the right, flush with the early work, symmetrical
3-window range; tripartite window arrangement to 1st and 2nd
floors with hornless sashes (8:12:8 and 4:6:4 panel
respectively). The ground floor is taken up with a large late
Victorian/Edwardian semi-circular opening (now with C20 glazing
but originally a separate entrance to the Bull Hotel), flanked
by elaborate large corbels supporting pineapples, with, over the
window arch, a central swag and bocranium and the name of the pub
following the curve of the opening; all surmounted by a short
cornice. The plinth is polished limestone. Other external
features: to the inner (courtyard) elevation of the left (south)
wing, cast-iron piers mark the original dismounting area (now
with C20 infil); this elevation contains various early to mid-C19
hornless sash windows (the tripartite arrangement lighting the
1st floor ballroom), some renewed. Just within the coach
entrance to the right and now partially internal, 2 original (ie
late C18( sash windows at ground level, one set on a curve (12
panes). Interior: Open well staircase with stick balusters and
ramped rail; ballroom with 2 fireplaces with white marble
surround; other features of uncertain date.