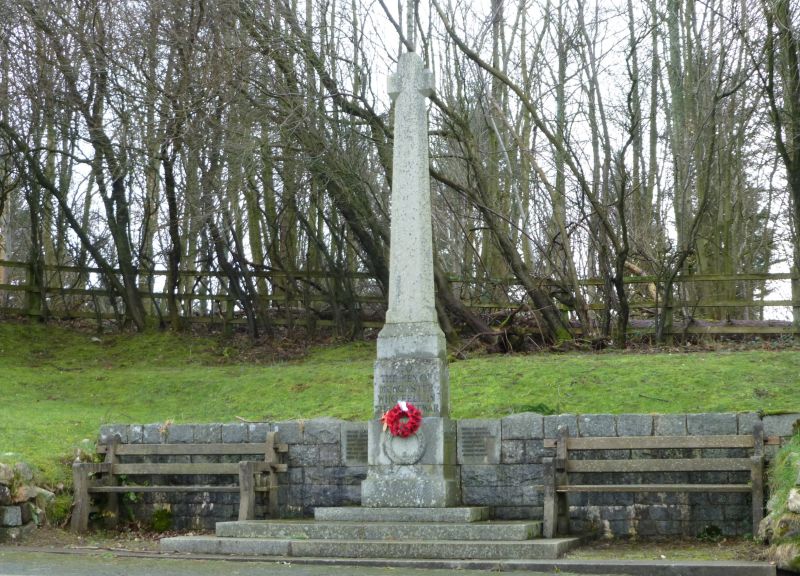 The memorial stands by the roadside on the main road between Barrow-in-Furness and Gosforth (near Seascale) at the road junction leading to the coastal village of Ravenglass. It comprises a war cross of Lakeland granite, the shaft lozenge sectioned, which tapers into a rectangular plinth. That carries the inscription TO/ THE MEN OF/ MUNCASTER/ WHO FELL IN/THE GREAT WAR. Beneath is a laurel wreath carved in relief, the only example among Lutyens’ memorials of this type. There is a base of three broad, square, shallow steps. The memorial is set within a shallow, stone-walled, recess, with the names of the fallen from both world wars inscribed on blocks inset into the wall.

Lutyens had visited Muncaster Castle to discuss a possible scheme of alterations for Sir John Ramsden. Nothing came of this, but in 1919 Sir John commissioned Lutyens to design a war memorial in the form of a cross, symbolising the sacrifice of the troops. The memorial was unveiled in September 1922 by Mrs Cowan from Ravenglass, who had lost three sons in the war, and a daughter to typhoid.

Muncaster War Memorial is listed at Grade II for the following principle reasons:

* Historic interest: as an eloquent witness to the tragic impacts of world events on this community, and the sacrifices it made in the First World War;

* Architect: by the nationally renowned architect Sir Edwin Landseer Lutyens (1869-1944), who designed extant 58 memorials at home and abroad including the Cenotaph in Whitehall;

* Design: a simple yet elegant War Cross, fashioned from a local stone.