Pembroke College, the Buildings Surrounding Old Court (Except the Chapel and Cloister) and Ivy Court 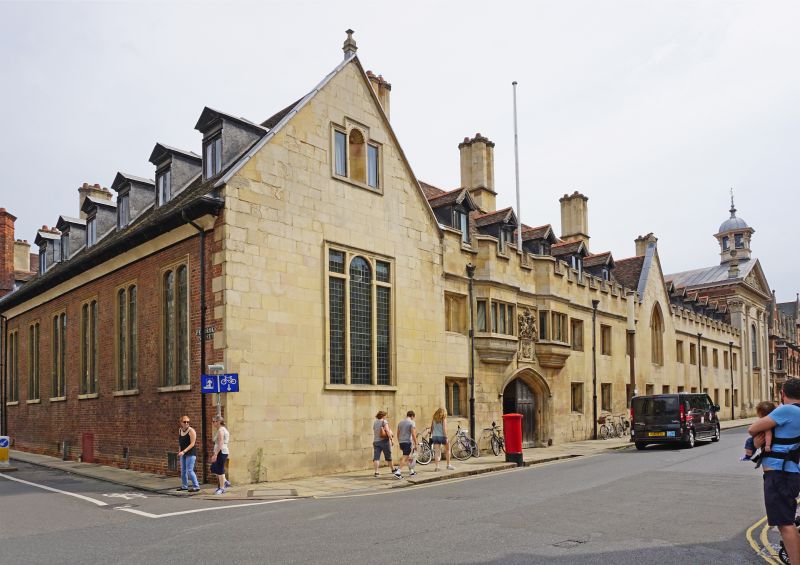 PEMBROKE COLLEGE
1.
942
The Buildings surrounding
Old Court (except the Chapel
and Cloister) and Ivy Court.
TL 4458 SE 6/276 26.4.50.
I
2.
Old Court
West Range. of C14 origin but the walls were ashlared in the C18. It
includes the main gate of the College. Some external features of C17 including
mullioned windows. The interior has been largely modernized, but there
is some early C17 panelling and other woodwork, probably from the Old hall
of 1634.
North Range. Only the core of the medieval walls remains within the C18
facing. The Old library, converted from the Chapel in 1690 forms the Western
end of the range. it has late C17 mullioned windows. The interior has
a fine plaster cornice and ceiling by Henry Doogood, dated 1690, and original
bolection moulded oak panelling and bookcases. The next of the range has
C17 doorcases and one room has oak panelling of circa 1630.
East Range and Hall 1875 by Alfred Waterhouse. Altered by Maurice Webb,
in 1925, who put in the ceiling, and the windows by D Kindesly in 1949.
There is some panelling and other woodwork from the Old Hall of 1634.
Ivy Court
North Range. The western end built 1614-16 and the Eastern end added in
matching style in 1670. Red brick with Ketton stone dressings, Robert
Greenfold Mason. The interior of the range has a number of late C17 fittings
including fireplace, doorways and bolection moulded panelling. There is
also much C18 panelling.
South Range and Hitcham Building. Built in 1659. Seven bays, and apparently
of one build. The Hitcham arms appear on both sides of the building.
The interior has 2 original staircases, stone fireplaces, and much C18
panelling. Including the set occupied by Thomas Gray, poet. (RCHM).