A Grade I Listed Building in Kempsford, Gloucestershire 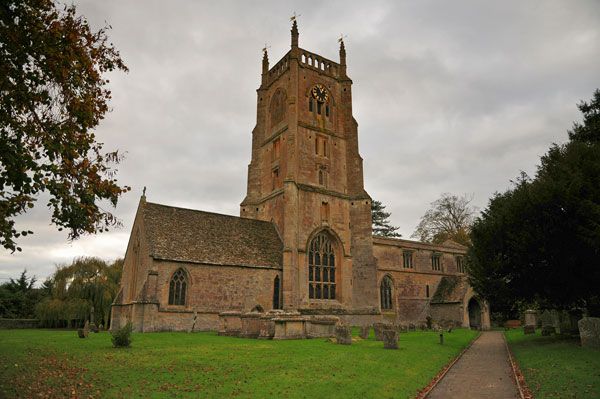 Large tower of three stages with offsets and stepped diagonal buttresses rising to crocketed pinnacles and openwork parapet. Three-light belfry openings on each side with stone mullions and arched hoodmould with carved stops; middle stage has small single light with square hoodmould below a square framed with three concave moulded lights, centre one blind; lowest stage has very large four-light windows to north and south with king mullion, two transoms and Perpendicular tracery and single-light over to south, niche to north. Clock face on north side of tower.

Interior: eight bay nave roof with three tiers of arched wind bracing, corbels for rood screen at east end of nave. Tower has doorway in north-west corner, lierne vault decorated in heraldry in 1862 and stone seats around side walls. Fine stained glass by Kempe in north window. Chancel has wagon roof, with painted ciborium probably of same date as tower decoration, plaster has been removed from walls in chancel, probably when two bay arcade opened up by Street to form south chapel. Large Perpendicular tomb on north wall with two mutilated seated figures and recumbent effigy probably of earlier date. Pulpit by Street, with marble painted over, choir stalls with fanning leaf finials also by Street.