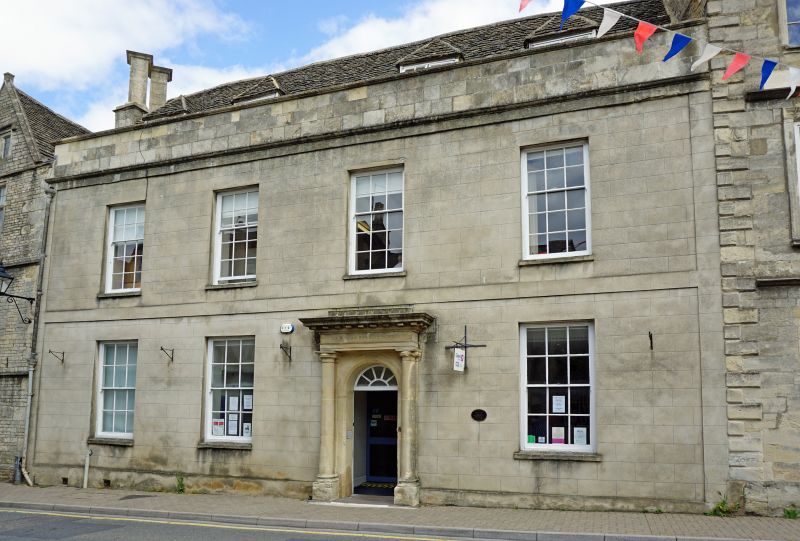 GV II
A townhouse, later Tetbury Grammar School and Sir William Romney's School, and now a group medical practice with flats above. The current building dates from the early to mid-C18, with a core probably of the early C17, and some remodelling circa 1800.

MATERIALS: The building is incised render to the Long Street elevation, and ashlar to the garden elevation, under Cotswold stone slate roofs, with ashlar end stacks and another of brick.

PLAN: The house is double-pile, with the original stair hall set between the two ranges, and principal rooms to either side of the entrance to Long Street. To the rear is an additional single-storey canted bay.

EXTERIOR: The main elevation to Long Street is of two storeys and attic, a four-bay range, rendered and incised to resemble ashlar, with a three-course ashlar parapet, rendered string course and plat band, and vertical side-strips. The ground floor has three six-over-six pane sashes in plain reveals, with the doorcase set in the bay right of centre; it has two attached stone Doric columns, frieze, dentils, cornice and a small recessed blocking course. The semi-circular headed doorway has a radial fanlight and houses a panelled door fielded and flush panes. The first floor has six-over-nine pane sashes in plain reveals. The attic has four small, hipped dormers with multi-paned timber casements, partly hidden by the parapet. The rear range is of three storeys and is connected by a polygonal stair well to the main range. The garden elevation is of four bays, finished in ashlar with a parapet and moulded dentil cornice, with two string courses and a first-floor sill band. All the windows have moulded architraves. There are three windows to ground floor, with a semi-circular-headed doorcase to the left, which has a moulded architrave, keystone and imposts, a radial fanlight and double panelled and partly-glazed doors. To the left of the main range is an additional large, single-storey canted bay dating from the early to mid-C19, with a hipped roof, stone cornice and parapet. It has long, 12-pane sash windows with decorative flattened capitals between them, and rosettes along the frieze above.

INTERIOR: The interior of the building has been almost entirely altered, through its conversion first to a school and later to a medical practice.

HISTORY: Romney House, 41 Long Street, formerly known as The Ferns, is a substantial town house which probably originated in the early C17, though the majority of the existing building dates from the first half of the C18. The house was bought in 1671 by Nathaniel Body, a clothier, who had also purchased the manor house of Tetbury, situated at The Chipping; he laid out gardens for The Ferns on the former grounds of the manor house, running to the rear of The Ferns and the adjacent houses along Long Street. The Body family remained in residence at The Ferns until 1770, when it was sold to John Paul, solicitor of the town, who partly rebuilt it circa 1800. The Paul family lived there until 1892. In 1897, the house was occupied by Mrs Raymond-Barker. In 1921, the house was sold and converted to Tetbury Grammar School, in which use it continued until 1969, when a new school was constructed in Lowfield Road, on the edge of the town, after which it became a medical practice. The former grounds, which had been used as school playing fields, were sold and developed with a small housing estate from 1970.

In the 1950s, the then Headmaster, Reginald Woodward, renamed the school Sir William Romney's, after Sir William Romney (d.1611). Romney was an illustrious son of the town who became a successful London merchant, a member of the Merchant Adventurers, one of the founders of the East India Company and part of the governing body of the new colony at Virginia. In his will, Sir William Romney, who was a great philanthropist, left the right to the tolls on wool and yarn payable in the town to the people of Tetbury, from which £13 was to be paid annually in perpetuity for the salary of a schoolmaster to teach at a Grammar School for the children of the parish, at no cost to themselves. This was administered by a new body, The Thirteen, who continue to hold the fund. The school was held for many years in the roof of the north aisle of the parish church, and continued until 1800, when the tolls from the market were no longer sufficient to cover the salary of a master; the school then fell into abeyance. In 1830, a new agreement was made, to pay for the salaries of a schoolmaster and schoolmistress for an elementary school, and the connection with the ancient grammar school was lost. When the Tetbury Grammar School was revived at The Ferns in the 1920s, monies were contributed from Sir William Romney's fund by The Thirteen, and the adoption of the name of Sir William Romney for the school in the 1950s restored the link between the Grammar School and its benefactor. The school became a comprehensive in 1954, and moved to its new location in 1969, but retains the name of Sir William Romney.

REASONS FOR DESIGNATION: 41 Long Street is designated at Grade II, for the following principal reasons:
* The house, formerly The Ferns, dates from the first half of the C18, around a C17 core
* It is a substantial town house, with a restrained Classical elevation to Long Street, and a more elaborate garden elevation to the rear, with a good mid-C19 addition
* Despite extensive internal alterations associated with its uses as a school and later a medical practice, the exterior continues to demonstrate significant architectural interest
* Historic interest for its former use as Tetbury Grammar School, the revival of a school funded by the town's C17 philanthropist, Sir William Romney
* Group value with the many other listed buildings of the C16, C17 and C18 which line both sides of Long Street in this, the historic centre of the town