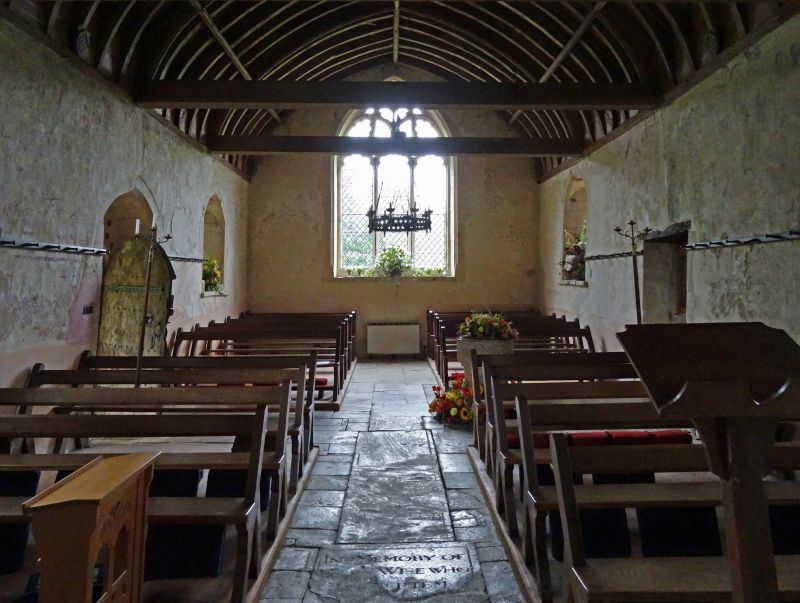 Small Anglican church. Early C12 nave with C13 chancel, restored
1913. Rubble stone with quoins, stone slate roof with coped
verges to nave and bellcote at east end of nave. Nave with south
porch, chancel. Nave has raking buttresses on north side and
single lancets, trefoil to east, flanking Norman square-headed low
doorway with cambered top lintel carved with a scene showing the
Lion of Righteousness triumphing over the agents of Evil. On
south side, single round arched light with external rebate and
drilled holes for shutter to left of porch, and 3-light stone
mullion window of C15 to right with arched lights and square
hoodmould. Large Decorated 3-light west window with flowing
tracery. Bellcote has large base on ridge and single triangular
headed cusped arch with bell. Chancel has 2 small lancets of
north side, 3 stepped lancets with arched hoodmould and carved
stops to east, and central priest's door with shouldered arch to
south flanked by single lancet to left and square headed opening to
right.
Interior: C14 wagon roofs to nave and chancel. All windows have
deep internal splays. C13 stone screen on chancel side of pointed
chancel arch with moulded edge and elbow of one return stall on
south side. Wall paintings survive in nave and chancel from C12
to C15. Decorative treatment of north wall of chancel with
cinquefoils and tendrils within painted stone courses. Nave has
figures of Saint Christopher and Saint George and the Dragon on
north wall, and large painting depicting "Keep Holy the Sabbath
Day" on south wall. Norman font with chevron moulding. The
church was abandoned after C15 due to an outbreak of the Black
Death and is now isolated from the village which moved to the
hamlet north of the main road (A417) formerly called Ashbrook, now
Ampney St. Mary.
(David Verey, The Buildings of England: Gloucestershire - The
Cotswolds, 1979.)