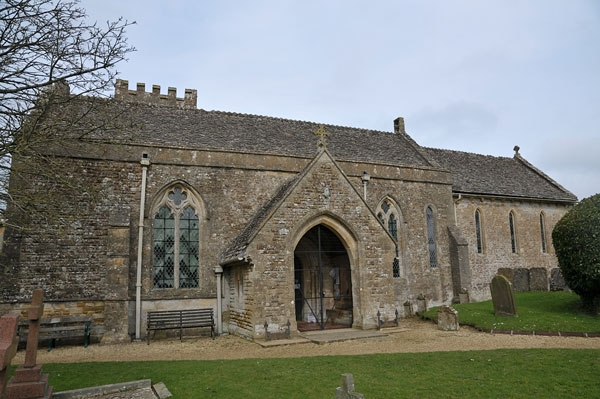 LITTLE RISSINGTON LITTLE RISSINGTON VILLAGE
SP 1819-1919
8/215 Church of St Peter
25.8.60
GV II*
Anglican parish church. C13, C14, C15. Restored c1850 by Francis
Niblett. Extended and altered 1883 by W. Bassett Smith. Nave
and chancel limestone rubble. Some ashlar in the south wall of
the nave. West end of the nave (where extended C19) north aisle
and porch rock-faced limestone with dressed stone quoins. Tower;
coursed squared and finely dressed limestone. Stone slate roof.
Nave with projecting south porch and north aisle. Tower set in
the angle between the north aisle and the C19 extension to the west
end of the nave. Nave south wall; diagonal and side
buttresses. Tall lancet right. Two C14 two-light windows with
quatrefoils over with ogee-curved cusping and stopped hoods, either
side of the porch. C19 studded plank door (within porch) with
decorative strap hinges within a round-arched surround of c1200,
comprising an arch of 3 orders with roll-mouldings on two orders of
cylindrical shafts. Roll-moulded hood. C19 three-light west
window with flowing tracery. Ashlar parapet with moulded coping
to the south wall. C13 chancel with clasping buttresses, three
lancet windows on each side. Additional lancet with cusped head,
set at a lower level on the south side. Corbel table with hollow-
moulded corbel, at eaves. One corbel on the south side with
carved head decoration. Original graduated C13 triple lancet
window at the east end. Traces of at least one (possibly two)
priest's doorways in the north wall of the chancel. C19 north
aisle with side and angle buttresses and pointed single and two-
light windows, pointed 3-light window with quatrefoils at the east
end. Buttressed C15 three-stage tower. Inscription 'T K C W /
1703 / E L' below the parapet on the south side suggests it may
have been restored at about that date. Single light with a 4-
centred arched head and stone louvres to the second stage.
Similar 2-light belfry windows with carved spandrels to the upper
stage. Battlemented parapet. String between the second and
third stages. C19 projecting porch with stilted-arched entrance.
Roof; stepped coped gables. Sanctus bell turret (without a bell)
arch brattished top at the east end of the nave. Upright cross
finials at the gable ends of the chancel, north aisle and porch.
Stone ridge tiling with curved apex.
Interior; plastered. C12 nave arcade of two C12 arches with
cylindrical piers supporting large overhanging square scalloped
capitals. An octagonal pier with a square hollow-moulded capital
has been inserted where the south-east corner of the tower rests on
the west arch of the nave arcade. A double-chamfered pointed arch
between the tower and the aisle also springs from the pier. Small
C15 flat-chamfered Tudor-arched opening in the right of the eastern
arch of the nave arcade, formerly giving access to stone stairs to
the rood loft via a similar opening. C13 chancel arch of two
orders. The inner order springs from a corbelled impost with
scalloped decoration to the soffit of each corbel. The left-hand
impost has a moulded top with daisy decoration below, the right-
hand impost is more heavily restored and lacks the daisy
decoration. Three-bay nave with 2 half bays in addition at either
end, late C18-early C19 roof trusses with an arch-braced collar and
raking struts: arch-braced collar, ridge purlin above the collar
with scissor bracing above. The arched bracing is supported on
simple moulded corbels. C19 arch-braced roof trusses with king
posts to the north aisle. Coloured tile flooring including some
encaustic tiling in the nave and chancel. Large cinquefoil headed
recess at the east end of the north aisle (within the vestry).
Piscina now partly hidden by the pulpit in the south wall of the
nave. C14 trefoil-headed piscina in the south wall of the
chancel. Aumbry (formerly with a door) in the wall opposite.
Fixtures and fittings; C15 octagonal font with quatrefoils in each
side in aisle opposite the south door. C19 octagonal stone
pulpit. C19-early C20 pews and choir stalls. Monuments; early
C18 stone ledger with inscription now partly obscured by C20 organ
at the east end of the north aisle. Monument to Maria, wife of
Robert Glyn, died 1682, on the north wall of the chancel.
Circular inscription plaque with a marble surround with two cherubs
leaning towards a skull at the top and two winged cherubs' heads
towards the bottom. C19 marble monument to Robert le Marchant,
former rector, died 1915, his wife and three of their children.
C20 R.A.F. memorial window at the west end of the nave.
(V.C.H. Vol. VI p.l04 and David Verey, The Buildings of England,
The Cotswolds, 1979)