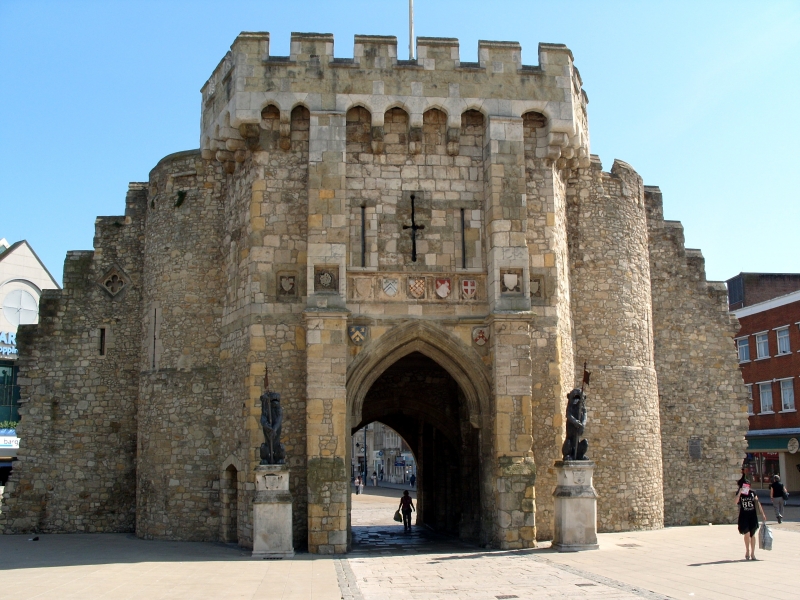 2.
Dates from circa 1180 with addition and alterations of circa 1290, C18 and
restored in 1864-5. It was built as a town gateway with Guildhall at first
floor level. Breaches were cut in the adjoining Town Walls in the 1930s.
Two storeys built of stone and flint. Ground floor has a central round-headed
archway of circa 1180-1200 the arch and responds round-chamfered with small
square abaci. Two other arches added in 1764 and 1774. Large drum towers
were added on the north side circa 1280-90. These retain arrow slit windows.
Embattled north front added circa 1400. South side 2 storey portion added
probably in late C13 with 4 windows lighting the upper storey room (restored
1864-5). Between the centre 2 windows is a trefoiled niche containing a statue
of George III in Roman costume. This replaced a wooden statue of Queen Anne,
now in the Bargate Museum. Bell of 1605 attached on the left hand side.
This was the curfew and alarm bell. Sundial of 1705. Five panels containing
painted shields of C18 date. The interior of the Guildhall contains late
C13 stone fireplaces with cinquefoil arch. This is one of the finest town
gateways in England. Scheduled as an Ancient Monument.