A Grade I Listed Building in Eversley, Hampshire 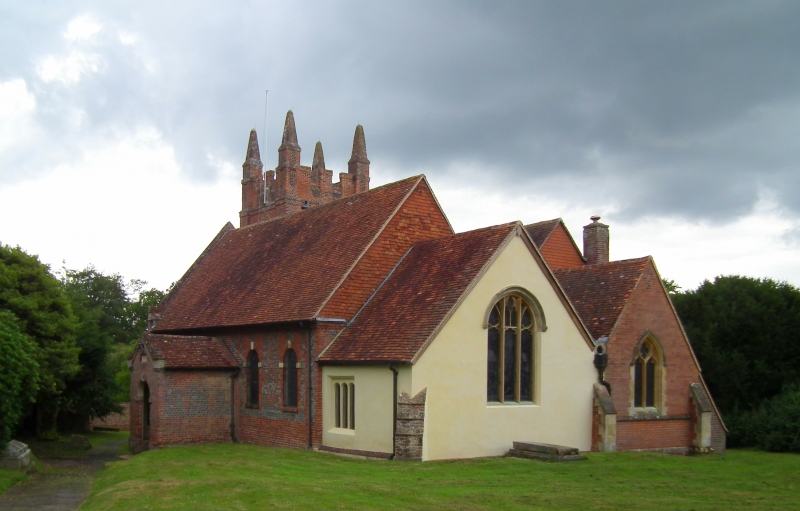 A church of medieval origin, the east end retaining something of the pattern
of a chancel (now north chapel with a surviving piscina in the south east corner)
and a south chapel of about 1500 (now the chancel). The remainder of the
building is 1724, comprising a nave and a north aisle of almost equal width, a
porch (dated) and a western tower (dated 1735) attached to the north aisle; this
work is by John James (a pupil of Wren). The interior is of 5 narrow bays,
with a plain round-arched arcade on square piers, having simple bands and plinth.
On the outside the brick walling has blue headers with red flush dressings,
comprising jambs which continue upwards, intermediate verticals, with a diaper.
a high plinth, and arches which have blue headers alternating. The round-headed
windows have stone keys, impost blocks and cills. The tower has 3 main stages,
marked by double projecting bands, a plinth, crenellated parapet and tapering
pinnacles above panelled corners. The belfry stage has coupled openings in brick
work within an arched frame, with brick keys and impost blocks. A cambered panel
is in the centre stage and at the lower stage a similar panel (or window) above
an arched recess. The corners of the nave/aisle are pilasters, and the main
(west) gables has an arched panel below a brick dentil band at eaves level.
The plain gabled porch, centred on the symmetrical elevation (south) of the nave
has an arched entrance and similar details. The east end is rendered externally
with corner brick buttresses and a 3-light window on the south side; the 2 east
windows have 'restored Gothic' tracery. within there is a notable chancel screen
(1730), designed as a Roman arcade of 3 bays in the Tuscan order. There are
several C18 wall tablets, an alabaster female figure on a panelled tomb (c1860),
a memorial font of 1867, and a Royal Coat of Arms on the west wall. Charles
Kingsley was rector from 1844 to 1875. Listed grade I for historical associ-
ations with Kingsley.