A Grade I Listed Building in Highclere, Hampshire 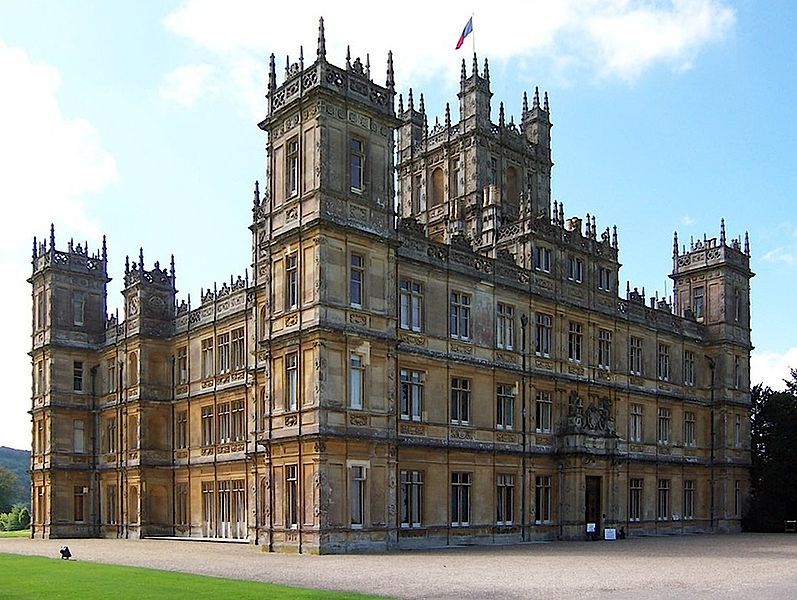 Church of England Parish: Highclere St Michael and All Angels

A plain C18, 3-storeyed mansion arranged round a central top-lit hall, but with the exterior refaced as Elisabethan elevations in the style of Wollaton by Sir Charles Barry in 1839-42; the addition of corner turrets and an off-centre tower causes a resemblance to the Palace of Westminster (the most famous of Barry's designs). On the old brick core, and incorporating the older fenestration pattern, the Bath stone ashlar exterior is presented in 3 symmetrical elevations, of 3 storeys with a fourth storey for the corner turrets and the north and south centrepieces. The north (entrance) front has 1.3.3.3.1 windows. The pierced parapet has strapwork and pinnacles; and each storey is an Order of pilasters applied to the turrets and centrepieces, ascending as Doric, Ionic, Corinthian and Composite, with pilasters coupled on each side of the centre, and a pedestal stage containing panels. The windows have mullions and transoms, with narrow lights between panels in the turrets, the wider spacing of the sides lacking pilasters but with the frames set in raised panels. The central doorway has a shield above the Doric frame. The turrets are set forward a little and rise higher than the central attic stages. This reticulate elevation pattern is repeated on the south front, without the doorway. The east elevation is varied by a recessed centrepiece (and a rythm of I.I niche 1.3.1 niche 1.1 windows) with the niche unit raised as a lesser turret. The tower rises as a tall 2 storeys above the roof line, with a more elaborate treatment of the Orderly design;
it appears central to the east elevation but is offset westwards to the north and
south elevations. The west wing is attached as a lower Tudor brick mansion, with
gables and pepperpot turrets, having stone features; it is masked by landscaping. The main interiors demonstrate elaborate essays in different styles. There is a Gothic (Early English) entrance hall with stone quadripartite vaulting, and coloured marble enrichment (by Butterfield) on clustered columns and floor. The main hall (by Thomas Allom 1862) has a generally Pependicular style, with a rich surface decoration, including C16 tapestries above Cordoba leather panels. The staircase is Gothic, occupying the large space below the tower, and leading to an arcaded corridor surrounding the upper part of the hall. The library has a classical finish, the Music Room has a mixture of C18 decoration (probably reconstituted from other parts of the house), the Drawing Roomis Roccoco of circa 1900.