A Grade I Listed Building in Dummer, Hampshire 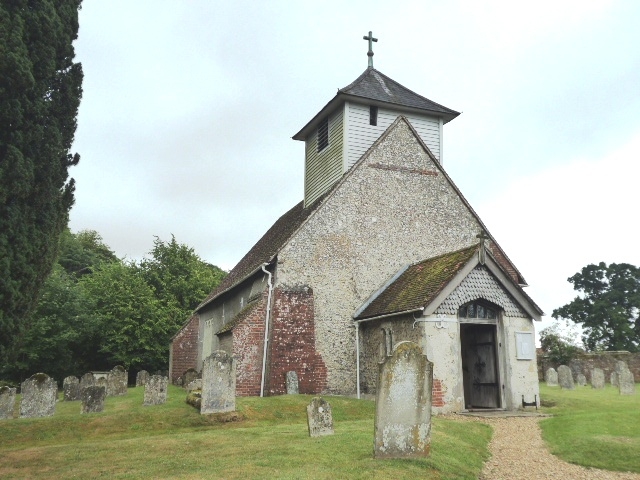 Circa 1200, C14, C15, C19. Chancel (Early English), nave, west porch (C15), and a
large bell turret above the west end of the nave. The chancel has 3 lancets on each
side and a group of 3 to form the east window; the interior and exterior has been
restored, but there is a C17 communion rail with balusters, and a small brass
(of late C16) on the east wall. There is a plain deep porch, with small cusped
windows. The nave interior is rich in detail. Above a pointed chancel arch and
tie-beam there is a C15 curved canopy to a former rood, with ribs, bosses, and panels.
To the north side of the chancel arch is a deep niche (C14) with ogee tracery, and next
to it is a small carved wood pulpit of 1380; the other side of the chancel arch has a
squint (hidden by a wall monument). Above the niche and monument are painted (and
pointed) Prescription panels. There is a large 3-light Perpendicular window on each
side of the nave with an arched tomb recess below the cill on the north side. The west
end of the nave is filled with the massive timber framing of the bell turret, the floor
of the ringing chamber being extended eastwards to provide a gallery, leaving the
western half of the nave with a low ceiling. Below this on the north side is a Royal
Coat of Arms of 1672 (Charles II) and a panel with a table of donations, in the gallery
is a hatchment. A plain octagonal font is Victorian. Two stained glass windows by
Kempe, 1895 and 1898. The exterior is plain, with red tile roofing, flint walls
reinforced by brick abutments, stone dressings. The bell turret has weatherboarded
sides and a low-pitched pyramid slate roof. The churchyard has many plain C18 and
early C19 tombstones, now mostly illegible.