A Grade I Listed Building in Rowlands Castle, Hampshire 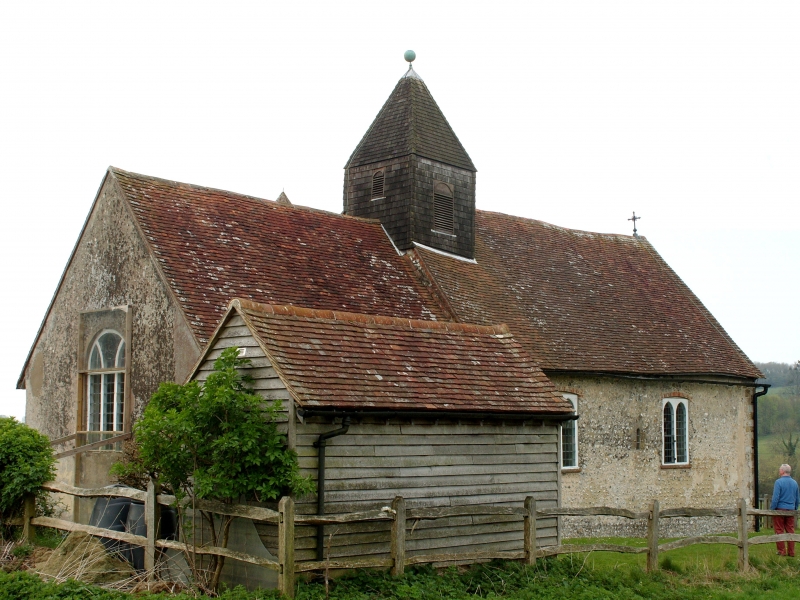 A Saxo-Norman church probably dating from the C10 or earlier with a chancel added in the C12 or C13, the nave widened on the south side in the early C16. The church was repaired in 1793 and 1824 and the west porch is shown on a map of 1864. The church was restored and a vestry and organ gallery added in 1912-1913 by the architect H S Goodhart-Rendel, for the Clark-Jervoise family. The vestry and chancel roof were restored following a fire in 1971 and the bell turret was restored in 1983.

Parish church, until 1864 dedicated to St Peter and St Paul. A Saxo-Norman church probably dating from the C10 or earlier with a chancel added in the C12 or C13, the nave widened on the south side in the early C16. The church was repaired in 1793 and 1824 and the west porch is shown on a map of 1864. The church was restored and a vestry and organ gallery added in 1912-1913 by the architect H S Goodhart-Rendel for the Clark-Jervoise family. The vestry and chancel roof were restored following a fire in 1971 and the bell turret was restored in 1983.

MATERIALS: flint and stone rubble walls, some rendered, with stone dressings, but the porch has brick dressings. Gabled tiled roofs, except for the bell turret which has a pyramidal roof hung with shingles.

PLAN: a two-bay nave, incorporating an organ gallery at the west end and bell turret at the eastern end, a lower two-bay chancel, west porch and a south-east vestry attached to the western bay of the chancel.

EXTERIOR: the west end is rendered, gable ended and has stone quoins. Below is a pointed arched entrance with wooden door. The later west porch is of flint with red brick quoins, including some reused Tudor bricks. The gable has decorative fretted barge boards and the entrance has a crenellated lettered tie beam above low wooden gates with crenellated tops. The inner sides have fixed seating.

The chancel north side has a two-light window in a stone surround. The round-arched east window is of 1912 within a medieval surround. The south side has a two-light stone window and a projecting lean-to vestry with a small lancet window facing south, a paired stone window facing east, an arched entrance facing west and an octagonal brick chimneystack with a conical roof.

INTERIOR: the nave has a barrel-vaulted roof with wooden tie beams. At the west end is a 1912 wooden organ gallery approached up a spiral staircase. The eastern end of the nave has a large pointed chancel arch above which is the bell turret framework. On the western face of this framework is a millennium fresco in medieval style by Fleur Kelly. Nave fittings include a C14 octagonal font with quatrefoil panels with shields and emblems on a stem with trefoil panels, pews with bench ends rising to simple circular finials, C18 box pews and a double-decker C17 pulpit with a C18 tester. On the wall west of the pulpit are painted texts of two periods, now obscured.

The chancel ceiling was restored by Goodhart-Rendel with plastered diamond panels, cable ribs, and 13 medallions (eagles, bishop, chalice, St. Hubert etc). On the inner face of the chancel arch is a painted Royal Coat of Arms of George III surrounded by the inscription "This chapel was repaired in 1793, Thomas Padwick, Chapel Warden. This chapel was repaired in 1824, Thomas Smith, Chapel Warden.'' The communion rail appears to be C18. There is a medieval piscina on the east wall and the splays of the east window have C14 painted figures of St Peter and St Paul, and two angels in the arch soffit. The small circular inset to the east window, which includes a small representation of the church, was the gift of Goodhart-Rendel. A panel north of the east window has obliterated details. A large two-tier wall painting on the north wall, dated to around 1330 depicts the life of St John the Baptist. The lower panel depicts Herod's Feast. The upper panel, formerly thought to refer to the life of St Hubert is now considered to include further scenes of the life of St John the Baptist with the addition of the medieval legend of the 'Hairy Anchorite'.

Until 1864 this church was dedicated to St Peter and St Paul. The earliest written evidence for a church at Idsworth is of 1053 in the last testament of Godwin, Earl of Wessex, when Idsworth, as part of the Manor of Chalton, was granted to his son Harold Godwinson. However, archaeological evidence indicates there may have been a much earlier stone structure on the site which was re-constructed in stone and flint walls in the C10.

After the Norman Conquest Idsworth was granted to Roger Earl of Shrewsbury as a chaplaincy to the Manor of Chalton. In the latter part of the C12 Queen Eleanor of Aquitaine granted the church to Tarrant Nunnery in Dorset and the chancel and bell turret may have been added then. The list of Rectors of Chalton and Idsworth goes back to 1305. A series of wall paintings in the church have been dated to about 1330. The church remained in the ownership of Tarrant Nunnery until the Dissolution of the Monasteries in 1539. During the Commonwealth Parliament awarded the manor of Chalton to Oliver Cromwell.

The wall paintings were discovered in 1864 and the dedication of the church was then altered to St Hubert in the belief at that time that the upper wall painting on the north wall of the chancel referred to a scene from the life of St Hubert. On the 1868 25'' Ordnance Survey map the church is shown including the west porch, as 'St Peter and St Paul Church (Chapel of Ease)'. By the 1897 Second Edition the building appears as 'St Hubert's Church'.

In 1912-1913 the church was refurbished by the architect H S Goodhart Rendel for the Clarke-Jervoise family, Lords of the Manor from 1789. This included moving the pulpit, a new west gallery and organ, a new vestry and restoration of the chancel, including an ornamental plaster decoration to the ceiling. The vestry is first shown on the Fourth Edition Ordnance Survey map of 1932.

In 1971 the vestry and chancel roof were restored following a fire and in 1983 the bell turret was restored.

The Church of St Hubert, a stone and flint Saxo-Norman church, widened in the C16 and restored in 1912-1913 by H S Goodhart Rendel, is listed at Grade I for the following principal reasons:

* the earliest known documentary reference to the church is in the 1053 Testament of Godwin, Earl of Wessex.