A Grade I Listed Building in East Meon, Hampshire 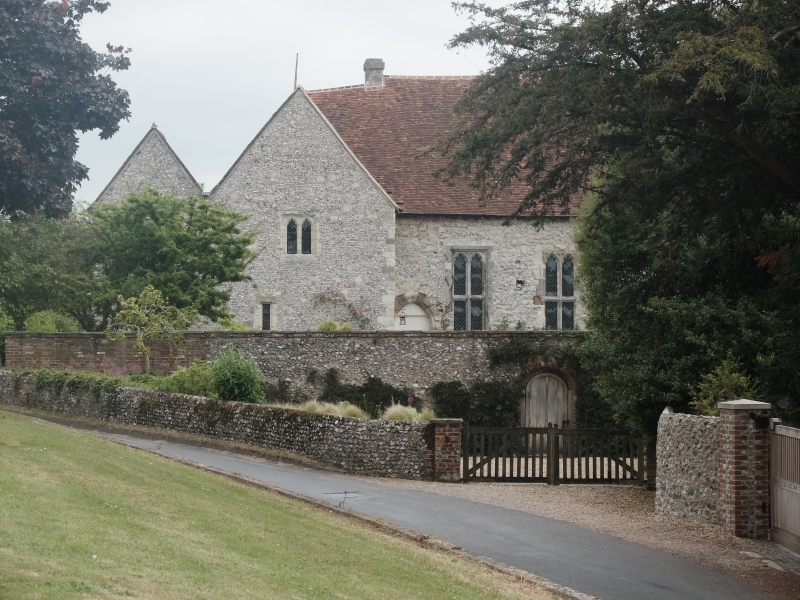 House. C14 Ecclesiastical court house, with late C16 timber framed house
attached to the east side, C17 and C18 minor changes, and early C20 minor
extensions and restoration. Walls of malmstone and flint rubble with stone dress-
ings; plinth, mullion and transom tall windows with cusped head; small single
and coupled windows with cusped heads (some restored), doorways with pointed arches:
brick C17 stack and minor dressings, exposed frame with brick infill, brick wall-
ing in Flemish bond, C20 flint walls. Tile roof, mostly gables, some hips. Large
open hall of three bays, with fireplace at one end, two windows each side, and
doorways at the north end; north end cross wing of two storeys (solar above
buttery) with smaller wing beyond of two storeys; to the east, linked by a
passageway, there is a 'farmhouse' building of two storeys irregular fenestration,
and to the north the passageway continues to the entrance (associated with Court
House Cottage). Casements of various sizes, with mostly C20 leaded lights.
Plain doorways. The interior of the hall (unused) is virtually original, of
flintwork with stone dressings, with a C15 fireplace inserted at the south end,
having a frieze of six panels containing quatrefoils: the north end has two
doorways with pointed arches. The open timber roof has King-posts and massive
tie beams with arch braces, resting on stone brackets, formed as carved heads of
kings and bishops. The solar (library) is of three bays, with open king post roof,
a large stone original fireplace and windows to the end gables and each side, a
doorway leads to the small wing (upper floor). Below the solar the buttery has
bare walls and original features (one blocked window) and doorways to hall and
small wing. The eastern part is of vernacular form, of two storeys and one
storey and attic, irregular fenestration, mainly C20 casements but a few
smaller older lights. The frame shows inside and outside and there are C17
oak doors and C18 moulded dadoes; in one part, the heavy vertical boarding is
possibly part of the hall screen. The C20 work is unobtrusive.