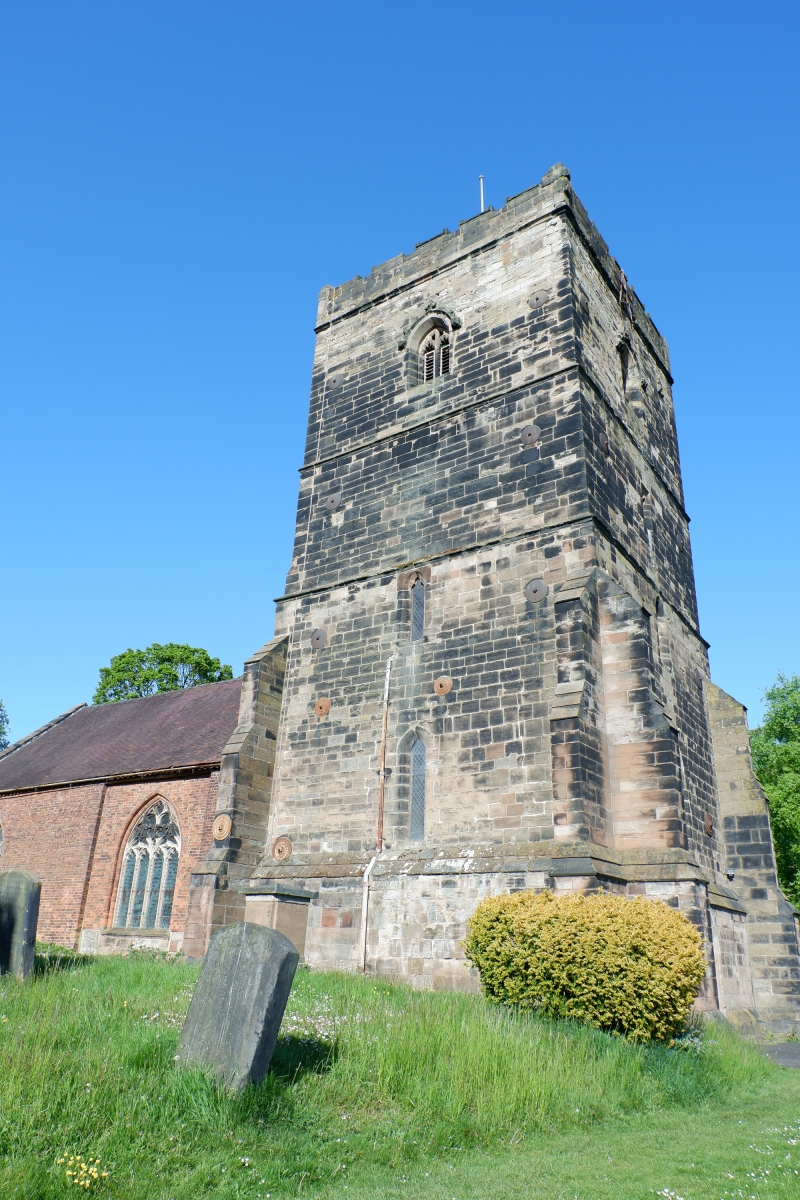 PLAN: Much trunciated: crossing with north transept, south tower, chancel with south vestry and north meeting room. There is no nave.

EXTERIOR: The 4-stage tower has angle buttresses in the lower 2 stages. It has a south doorway with continuous chamfer and 2-light Decorated south window, with lancets in east and west walls. The second stage has cusped windows, and in the 3rd stage are cusped south and east windows with sunk spandrels to square labels. Perpendicular 2-light belfry openings have louvres, below an embattled parapet. The north transept and crossing are under a single roof. The transept has shallow clasping freestone buttresses. In the west wall a shallow recess with 4-light Decorated window marks the position of the crossing. Further left is a 2-light window and the north has a 3-light Perpendicular window. (The 2-light east window is now enclosed by the meeting room.) The chancel has Decorated windows and continuous sill band. There is a renewed 5-light east window and two 2-light south windows, with the arch of another window blocked when the vestry was built. (A 2-light window in the north wall is now enclosed by the meeting room.) The low vestry has two cusped lancets in south and east walls, and pointed west door. The meeting room is in low-key Tudor-Gothic style.

INTERIOR: The crossing has nook shafts and semi-circular responds, all with fillets, scalloped capitals and pointed arches, suggesting c1200. On the outer north-west side is a blocked Tudor-headed doorway and blocked window above it, presumably to a rood-loft stair. The tower arch, set just south of the crossing arch, looks C13 rather than 1708, with one order of continuous chamfer and 2 orders dying into the imposts. The chancel has shafted rere arches and a blocked low-side window in the south wall. It has sedilia under cusped ogee arches. Roofs are mainly of 1848 although the 4-bay chancel roof, which has collar-beam trusses and moulded cornice, appears to incorporate older timber. The transept roof is 4 narrow bays with arched braces and windbraces. Crossing and tower have flat boarded ceilings divided into panels by moulded ribs. Walls are exposed stonework. The floor has C19 tiles with richer tiles in the chancel.

PRINCIPAL FIXTURES: The octagonal font, with foliage panels, foliage on the undersides, and stem with attached shafts, is by H.H. Martyn & Co. The round pulpit, with fine wrought-ironwork by Letheren & Sons of Cheltenham, is on a stone base. Benches of 1890 have shaped ends and panelled backs. Choir stalls, now installed in the crossing, are similar, but with openwork tracery to frontals and bench backs. The reredos, now under the west window, of 1905 shows Christ in Glory and SS Augustine of Hippo and of Canterbury, in Renaissance surrounds. In the chancel north wall is a re-set tomb fragment to Gerrard Dannet (d 1615), incorporating kneeling children in relief, and achievement. A small tablet to Philip Brace (d 1671) has an achievement. There are wall tablets to Dorothy Holbeche (d 1771) with broken pediment, by Richard Squire, Captain Richard Norbury (d 1800) with draped urn, by W. Stephens of Worcester, and Gilbert Penrice (d 1726) with broken pediment. Fragments of old glass are in the east window of the transept. Five windows are by Samuel Evans of Smethwick (c1890-91), including the Resurrection in the east window, the life of Augustine of Canterbury in the west window, and Transfiguration in the transept north window. A chancel south window shows the risen Christ, by Curtis, Ward & Hughes (1904) and in the north transept the 1914-18 war-memorial window showing SS George and Martin is by Pearce & Cutler of Birmingham (1921).

HISTORY: A hilltop church on the site of a Roman fort. It had a cruciform plan by the early C13, of which the crossing and some fabric of the north transept have survived. The chancel was enlarged in the C14. The church was partly destroyed in the Civil War, subsequent to which the nave, central tower and south transept were taken down A south tower was built in 1708 in place of the transept, apparently re-using old material. The north transept was re-faced c1803 and the window tracery renewed in 1848 by John Shilvock. At the same time new roofs were built and a south vestry was added. The west arch of the crossing was enclosed by Shilvock in 1850. Restoration in 1890 was by Lewis Sheppard, architect of Birmingham. The present furnishings date mainly from this time, although the interior arrangements were altered in the late C20 when the altar was moved to the west end. A meeting room was added in 1998-99 by Patrick J. Burton, architect of Evesham.

REASONS FOR DESIGNATION: The church of St Augustine, Dodderhill, is listed at Grade II* for the following principal reasons:
* For its complex history, and much altered form, reflecting the impact of English Civil War damage and subsequent re-configuration.
* It has substantial and well-preserved crossing arches of c1200.
* For the substantial C14 fabric of the chancel, including sedilia.
* It has an impressive Gothic-survival tower of 1708, which is said to incorporate re-used materials.