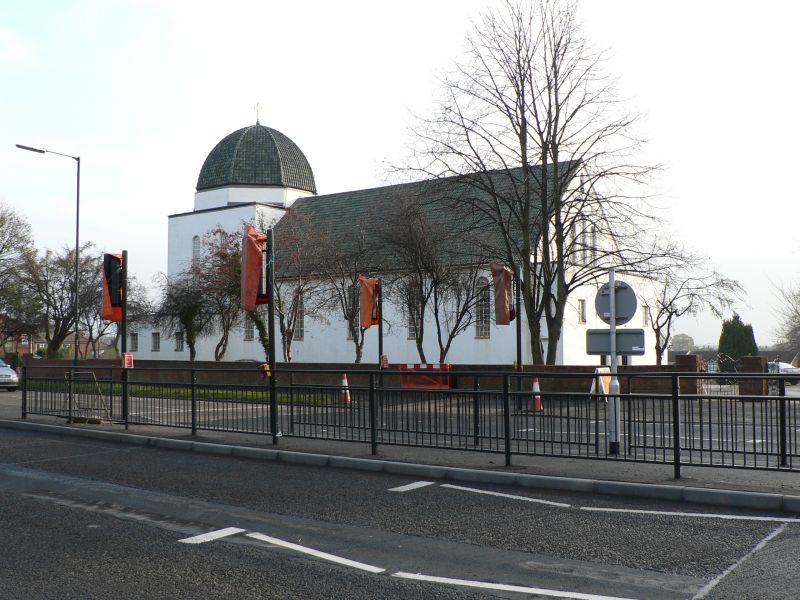 Parish church. 1939-42. Designed by Brundell & Faran of Doncaster, built by P P Taylor. Painted and rendered brick with brick dressings and blue/green glazed pantile roofs. Broad nave with porch to west and domed chancel to east with flanking Lady Chapel to the north-east and vestry to the south-east. All windows have metal casements with brick cills.
West front has projecting flat-roofed porch. Porch has central triple-arched entrance with two plain columns, and above a slate foundation plaque inscribed in Latin. Either side two small 2-light casement windows lighting the staircases to the gallery. Left return has a niche with projecting semi-circular base and canopy. Above and behind the porch a broad gable with three graduated and round-headed windows with above a round-headed bell opening with bell.
North and south facades both have five round-headed windows.
North front has flat headed doorway to left with semicircular canopy. Beyond to left projecting single storey chapel with three 2-light casement windows.
South front has projecting vestry to right with tall brick chimney stack and a round-headed doorway reached up 4 concrete steps on west front and three 2-light casements on the south front.
Tall eastern chancel has blank canted apse to east topped with pantiled half-dome and two tall round-headed windows to north and south. Above a set-back octagon supports octagonal dome covered with pantiles and a cross finial.
INTERIOR has three round-headed nave arches with small narrow side arches defining the passage aisles. West gallery reached up side stairs has late-nineteenth century organ. West wall has chrome-plated poor box and nineteenth century stone font from former church. Nave has herring-bone pattern wood block floor. Round-headed chancel arch reached up five marble steps with single flanking niches on either side. Chancel has round-headed niche and triple arched sedillia. Rectangular marble altar reached by three marble steps. Lady chapel to left decorated with tomb fragments from the former medieval parish church. Wooden pulpit and lectern. Painted wooden pews.
The church was built using the proceeds from the sale of a Victorian church on a separate site, and has a rich collection of old and contemporary fittings. Included as a good example of a late 1930s church.