A Grade I Listed Building in Smisby, Derbyshire 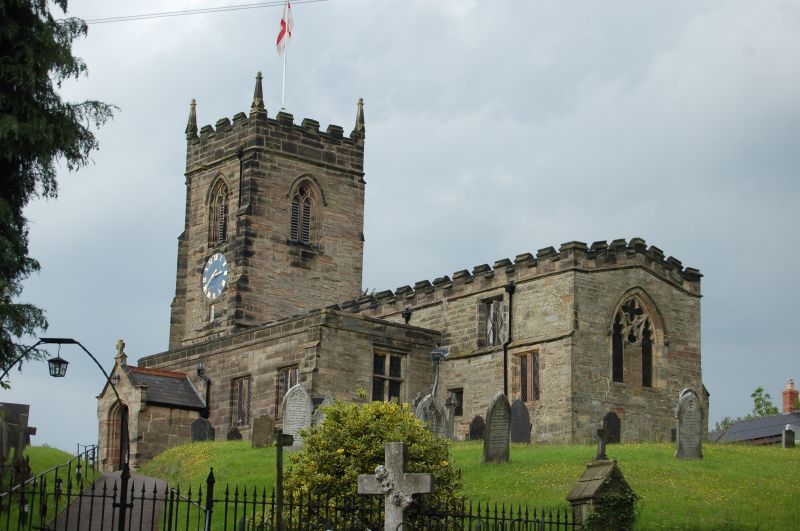 West tower of two stages divided by a chamfered string course. Diagonal buttresses to west, angle to east. The south side has a large circular clock face in recessed surround, and a tiny rectangular window below. To the west a three-light window with cusped lancet lights under a four-centred arch. Various tiny rectangular openings. Two-light bell-openings in each direction, with two plain lancet lights and mullions rising from the apex of the lancets. Tall battlemented parapet with four obelisk pinnacles. The north side has a C19 vestry with plain three-light chamfered mullion windows and a doorway with chamfered surround. The north side of the nave and chancel has two buttresses and three two-light chamfered mullion windows under flat arches. Tall three-light east window with bar tracery, and a piece of walling built up into the centre light. The south side of the chancel has a two-light chamfered mullion window and a small single light window placed at an angle.

MONUMENTS: at the west end of the south aisle an alabaster effigy of Joan Comyn, mid C14, and an incised alabaster slab to W Kendall +1500 and wife. On the north wall of the chancel an impressive wall monument to Henry Kendall +1627 and wife, with large kneeling figures facing each other across a prayer dusk. Kneeling children below. Re-used C16 linenfold panelling from Ashby-de-la-Zouch castle, as the dado behind the altar. Raised and fielded panelling in the vestry also said to have come from Ashby.