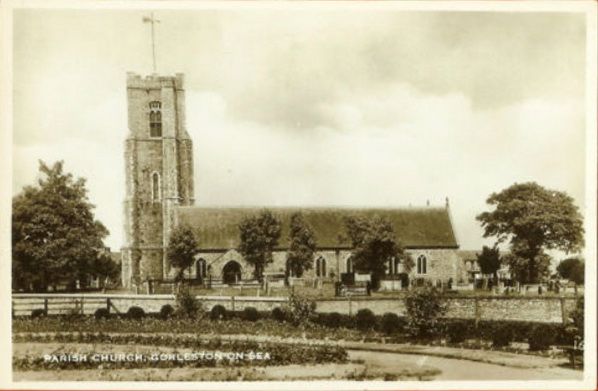 INTERIOR: no internal division between nave and chancel except for a trefoiled timber arch. Eight-bay arcade of octagonal piers on moulded bases and with moulded capitals. Double-chamfered arches. C19 scissor-braced roofs, boarded to the chancel. Triple-chamfered tower arch. South-east tower buttress projects into nave. Late C14 octagonal font with damaged figures to the stem and scenes in the bowl depicting the seven sacraments plus the Last Judgement. Damage recorded in 1643. C19 polygonal pulpit and chancel parclose screens. Organ of 1904 by Norman and Beard moved here 1978-9 (formerly in St John's Lowestoft). Brass of a knight of the Bacon family, c1320: full length, military dress, cross-legged. Royal Arms painted on board: of Charles II, dated 1664.