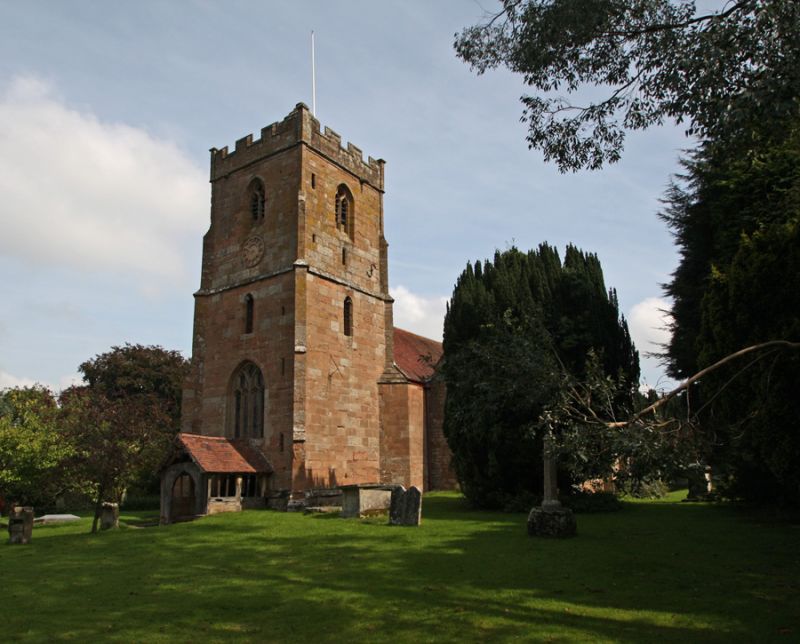 LEIGH CP -
SO 75 SE
2/36 Church of
St Eadburga
29.7.59
- I
Church. C12 and C13 with C14 tower. Restored 1855. Sandstone rubble
and ashlar with tile roof. Comprises a west tower with west porch, nave,
south aisle under apitched roof, and lower chancel. The tower has
diagonal buttresses and an embattled parapet. The bell openings are of
two trefoiled ogee lights with a quatrefoil under a pointed head. The
west window is of four cinquefoiled lights and has C19 Perpendicular
tracery. The open timber porch is probably C15. The principal posts
at west side are doubled, the inner posts jowled to form a pointed arch.
The inner truss has curved braces to a steeply-cambered tie-beam. The
west doorway of the tower is pointed and hollow-chamfered in two orders.
The north wall of the nave has three C14 windows of two trefoiled lights
with a quatrefoil under a pointed head. The buttresses have offsets,
except for those to each side of the eastern bay which are C12 stepped
pilaster buttresses. Between the second and third windows is a blocked
doorway with Tudor-arched head. Above is an empty niche with round head
roll-moulded in two orders which springs from angle shafts with cushion
capitals. The west wall of the south aisle contains a trefoiled one-light
window. The east wall has a lancet to each side of a buttress. The south
wall is C19, of four bays with 2-light windows. At the left is a pointed
chamfered doorway. The north wall of the chancel has three one-light windows
chamfered in two orders. The western one is pointed; the others have tre-
foiled heads. Between them are two stepped pilaster buttresses. The south
wall has two windows of one trefoiled light, a stepped pilaster buttress,
and a C19 pointed doorway. The east window is of five lights with Geometrical
tracery, renewed in the C19. Interior: the pointed tower arch is chamfered in
two orders which die into the responds. The south aisle is of four bays and
has pointed arches with two square orders springing from round piers with
scalloped capitals. The responds are paired engaged shafts with crocket
captials. The nave has a collar rafter-roof with soulaces and three tie-
beams. The chancel arch is chamfered in two orders and springs from responds
each with a central and two angle shafts with cushion capitals. The south
aisle overlaps the chancel. Its east end is divided by a painted screen which
incorporates C15 woodwork and has openings with traceried ogee heads. The
south wall contains an ogee-headed doorway to a rood stair. Set above the
altar of this south chapel is a statue of Christ removed from the niche in
the north wall of the nave during the mid-C20. This is said to be an
altered coffin lid with an effigy of c1220 (Pevsner). The font appears to
be Norman, although re-cut, and has chevron decoration and ropework moulding.
The chancel contains a trefoiled piscina and has communion rails with turned
balusters of c1700. On the south side is the chest tomb of Edmundus Colles
(died 1606), with recumbent effigy, the sides carved with coats of arms,
caryatids, and atlantes. Above is a wall monument with strapwork, figures,
a coat of arms, and pediment with shell. Against the north wall is a wall
monument to William (died 1615) and Mary (died 1602) Colles, with two kneel-
ing figures within an arched opening, a shield of arms, and 11 children carved
on the base. Further west is an alabaster memorial to Sir Walter and Lady
Elizabeth Devreux, erected in 1642, with recumbent effigies below a canopy
supported on Ionic columns. Above it is a large wall monument to Essex Devreux
(died 1639) with two kneeling figures, and a child seated on a ledge. (VCH,
Vol 4, p 106; BoE, p 211).