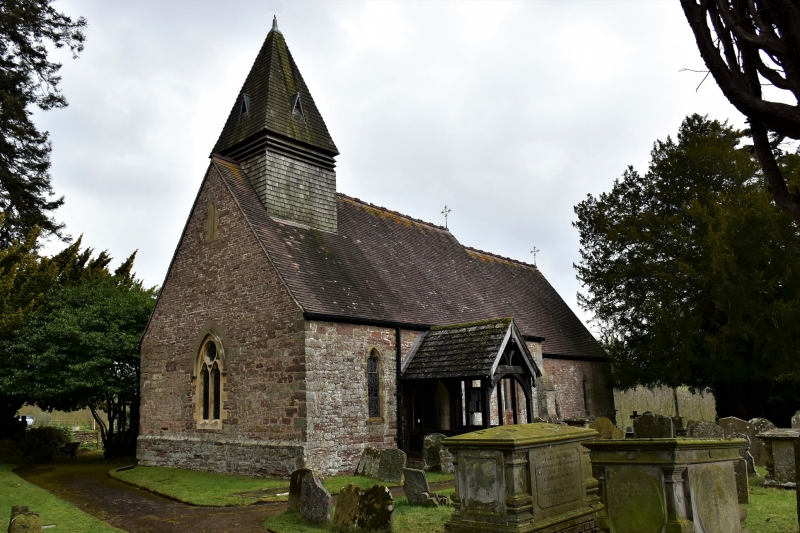 Parish church. C12 origins, restored 1875-6 by Thomas Blashill. Sandstone
rubble; nave and chancel have tiled roofs, bell turret shingles, and south
porch stone slates. Two-bay nave with bell turret inset from west wall, two-
bay chancel and south porch. West wall has battered base and pointed C19
window of two trefoil-headed lights beneath a quatrefoil. Blocked north
doorway with elliptical head and beneath, fragments of roll mouldings; north
window to east of door is C14 with semi-circular head containing blind trefoils;
vestry of c1875 projects to north; a further trefoiled light to north side of
chancel. East window: part of restoration, has three trefoiled lights with
three cinquefoils above. South window of chancel is a restored trefoil-headed
light with blind spandrels; blocked priest's door, possibly C14, with 2-centred
head. C13 east window of south side of nave has pointed head containing two
trefoiled lights under a quatrefoil; restored trefoiled window to west of C17
timber-framed porch restored in C20, C13 or C14 south doorway has 2-centred
head. Bell turret has pyramidical roof with a lucarne to each slope. Interior:
chancel has C19 open wagon roof, the nave possibly a C15 arch brace and collar
roof, C19 reredos in Venetian mosaics and altar table with the Entombment; re-
set piscina probably C13 has trefoiled head, octofoil drain and is supported
on columnar detached shafts. Pulpit has two sides of early C17 re-used panelling
with a deeply moulded frieze and gadrooning over Ionic pilasters which continues
as a screen beneath the chancel arch (formerly made up the Putley Court Pew).
Stained glass windows by Clayton & Bell except the west window which is by
Heaton Butler and Baque. The extent of the 1870s restoration is indicated
by a plan in the vestry showing the seating layout and the only medieval parts:
the west and south walls of the nave. The drawing is inscribed:
"The Incorporated Society for promoting the/
Enlargement Building and Repairing of Churchs/
and Chapels granted £20 towards reseating/
this church upon condition that all seats
except 5 in the Putley Court Pew be
set apart for the free use of the Inhabitants -