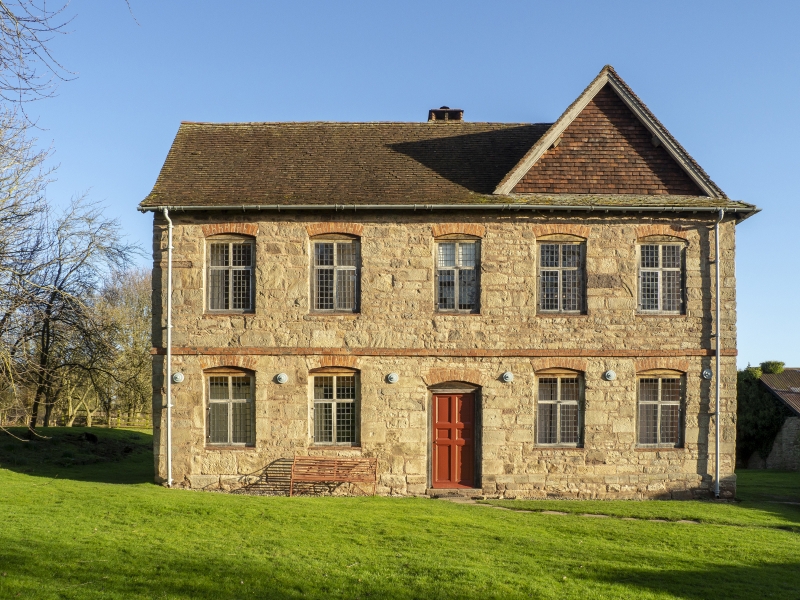 Farmhouse. C15 core, extensively enlarged during C17 with further C19
alterations, restored during 1983/84. Timber-framed on sandstone rubble
plinth; coursed sandstone rubble facade with later brick dressings, C20
weatherboard cladding to rear; tiled roofs. Formerly rectangular plan,
now L-plan with north-west corner of house demolished during restoration;
central entrance and two restored and resited stacks to west side of
wing aligned north/south and to north side of main block aligned east/
west. Two storeys. South front: string course and weatherboarded gable
end of wing to right; five cross casement windows. Central 6-panelled
door. Interior: restored to reveal roof of C15 great chamber; three bays;
main tie-beam trusses and intermediate open arch-braced trusses, chamfered
and cusped members, chamfered through purlins with chamfered and cusped
wind-braces. Ornamental framing in east wall with cusped bracing within
curvilinear diamond fields. Moulded main posts with stops. The restoration
has lowered the floor in this room to reveal the stops. The C15 wing may
have been re-erected on this site and may once have formed part of a larger
house with the decorative east wing revealed to a former hall block adjoining
to this side; no trace of smoke blackening on timbers.