A Grade I Listed Building in Wellington, County of Herefordshire 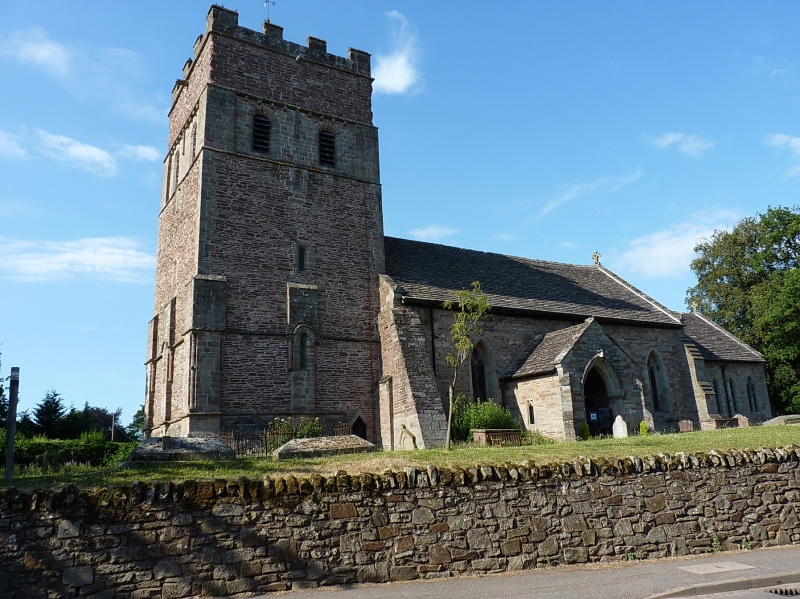 Tower: four stages separated by deep string courses, battered base.
Clasping buttresses to north-west and south-west corners and central
pilasters to north, west and south penetrate and stop above string
dividing first and second stages. These buttresses and pilasters carry
wall-shafts some with scalloped, some with figurative capitals, the
longer corner shafts with spiky open waist-bands; the pilasters in
addition each contain round-headed lights. Second stage has a small
round-headed light to each face above weatherings of the central pilasters
that terminate at this point. Third stage has a pair of round-headed belfry
openings to each of four recessed panels. Above each panel is a row of nine
corbels, the centre one supported on a wall shaft. The fourth stage is plain
apart from central water spouts just below the final string which defines C14
- C15 embattled top. Bell-ringers' entry through C18 triangular-headed
doorway to east of south side. Nave: large buttress to south-west corner;
C14 south-west window of two lights with trefoiled heads, two restored
similar windows to east of porch. North aisle: square headed 2-light
windows with cinquefoil heads, two facing north and one west. Between
the first two is a blocked north door with simple imposts and heavy roll-
moulding. North transept: a large north 3-light trefoil headed window with
heavily cusped tracery. Two similarly designed but taller 2-light windows
face east and west. Chancel: c1900 east window is similar to north window
of north transept; north side has blocked triangular headed door and a small
lancet in a chamfered openings; south-east window has two trefoil headed
lights with vertical mullions above like those in north transept, to its
left are three trefoil headed lancets and a triangular headed priests' door.
South porch: moulded entrance of four orders with small paterae on the imposts
beneath a label with a keystone in the form of a female face. Two side
windows are single lights with trefoiled heads and spandrels under square
heads. Roof of two trussed bays, two king posts, moulded ogee tie beams,
cusped collars, trefoil-headed wind braces and longitudinal arch braces.
C12 south doorway has fluted imposts, two roll mouldings to semi-circular
head and to jambs.