A Grade II* Listed Building in Allensmore, County of Herefordshire 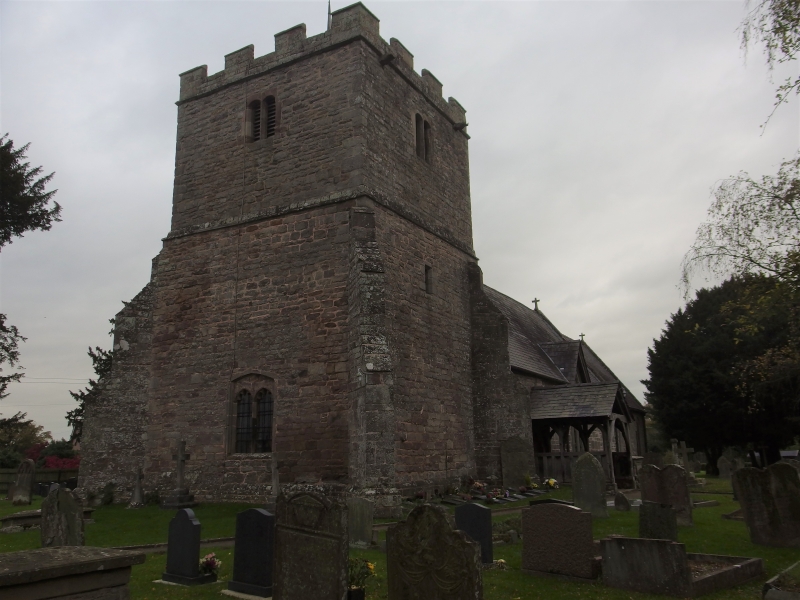 Parish church. C12, C14 and C15 with late C19 additions; restored in 1880.
Squared sandstone rubble with sandstone dressings; Welsh slate and tiled roofs.
West tower, three-bay nave, two-bay chancel, south porch and vestry. West tower
is late C15. Embattled parapet, two stages separated by string. Chamfered
plinth and diagonal buttresses with off-sets. Top stage has 2-light segmental-
headed openings to each cardinal face. North and south elevations each have a
small central chamfered square-headed opening set high up in lower stage. West
window has two cinquefoil-headed lights set beneath flat 2-centred head. Pyra-
midical tiled roof and weathercock. Nave has north elevation with three windows.
To left and right is a pair of 2-light cinquefoiled and traceried windows, each
with label and 2-centred head. Central window has two cinquefoiled lights with
four restored trefoil-headed tracery lights and a flat segmental main arch. To
left of centre is a weathered buttress. North doorway to right hand side is C14
with 2-centred head. Deeply moulded jambs and pyramidical stops to base of jambs.
East verge has gable cross. Vestry is late C19. To east is a 2-light ogeed and
traceried window with label and 2-centred head. On the north side is a semi-
circular headed doorway. Chancel has east window of four lights with quatre-
foiled reticulated tracery label and 2-centred head. The two south and one
north windows are all similar to the outer windows of the north side of the nave.
Blocked priest's door to left of centre. Eastern verge and gable cross. South
side of nave has another 2-light cinquefoiled and traceried window with label and
2-centred head to right hand side. To centre is a large gabled window of three
trefoiled lights with a large area of glazed tracery enclosed by three sets of
cinquefoiled cusps forming a large trefoil. South porch is mainly late C19 but
has earlier elements. Two bays of trusses with ties carrying raking struts.
Sides are open in upper halves with plank-and-muntin panelling to lower halves.
South doorway is C12 with round head, continuous roll-moulded inner order.
Outer order is supported on later corbels above square jambs. Interior has open
trussed rafter roofs, perhaps C14 and partly restored to both chancel and nave.
Chancel arch is 2-centred and double chamfered. Chancel has C14 cinquefoil-
headed piscina with octofoiled drain. C14 floor slab to Sir Andrew Herl and
wife Joan has cement or marble inlaid figures and cinquefoiled tabernacles.
One figure in armour with feet on a lion, the other in a long robe. Early C17
chair with blind arch on back panel containing initials "C P", acanthus
decoration and turned legs. East window has C14 stained glass fragments in
tracery including a crucifixion and two angels. The main narrative lights
are late C19 and dedicated to Maria Louisa, daughter of R Bent and wife of Rev
J C Crasett, Vicar ... "TOGETHER WITH THE PARTIAL RESTORATION OF THE CHANCEL".
The main inscription beneath the four lights reads: SUFFER LITTLE CHILDREN
TO COME UNTO ME: BLESSED ARE THE POOR FOR THEIRS: IS THE KINGDOM OF HEAVEN:
I WILL BE THOU CLEAN. East window on south side of 1908 depicts St Andrew
and St Peter. Wall monuments include on north side a large one for Edmund
Patteshall, died 1790 in brown, grey and white marble with a bas-relief figure
in an oval medallion, one on south side for Mary Berrow died 1775, and one to
south side of east window, late C17, with illegible inscription in square panel
with foliage border and cherub-head probably that for Richard Grumor, referred
to in RCHM. Another nearby on south wall has similar design with illegible
oval panel. Several for members of Berrow family on south wall. North wall
has marble plaque for Richard Watkin, died 1789, by Finch of Hereford and brass
plaque for Charles Crasett, died 1898 in Paris and buried in cemetière de
Courbevoire. Oak harmonium, late C19 by Estey Organ Co, Brattleboro, Vt,
USA. Early C20 oak chancel screen with deeply undercut frieze, panelled
roof to entrance and cresting above. Nave has early C17 oak part-hexagonal
pulpit with blind arches, strapwork panels and coupled Doric columns at angles
supporting entablature. Lectern, probably late C19, is oak and given by Emily
Bent for her father Rowland and her brother. Font is late C19, has octagonal
base carrying four detached marble columns and central drum; bulbous foliated
bowl with nodding trefoils. North-east window has stained glass for Revd PM
Symonds, 1868, depicting The Resurrection and Ascension. Opposite window is
for Eliza Bent, 1908. North-west window depicting St David is for Col Henry
Evan Patteshall, 1948. Central window on north side depicts Hope and is for
Elizabeth Symonds, died 1855 and her sister. War memorial in form of plaque
for eight of the parish who died in 1914-19 and two in 1939-45. Nearby on
north wall a wall monument to Elizabeth Hunt, died 1719. Opposite south door
a marble memorial for Sarah Jennings, died 1836, by Jennings, Hereford with
bas-relief of dove, harp and tree inscribed:

Cold is the hand that touch'd those hallowed strings
Hush'd the sweet voice that sang Redeeming Love
To harps of gold she now entraptur'd sings
The Lamb's New Song with Choirs of Saints above Rev, XIV, 2

Two aedicule wall monuments for Mary Burrell and Arnold Burrell, died 1815
and 1787, to west of south door. On east wall to south of chancel arch,
another to John Patteshall, died 1766. Against the west wall a C14 coffin
lid with long incised foliated cross rising from circular motif. Tower door-
way has moulded 2-centred arch in square head. The bases of both sets of jambs
have pyramidical stops. Above the door is a blocked opening with a segmental
head. Within the tower is a late C17 chair with twisted legs and stretchers
and woven open back panel. The Patteshall family occupied Allensmore Court (qv).
(BoE, p 64; RCHM, Vol I, p 14 - 16).

Listing NGR: SO4662935875
This List entry has been amended to add the source for War Memorials Register. This source was not used in the compilation of this List entry but is added here as a guide for further reading, 27 October 2017.