A Grade I Listed Building in Garway, County of Herefordshire 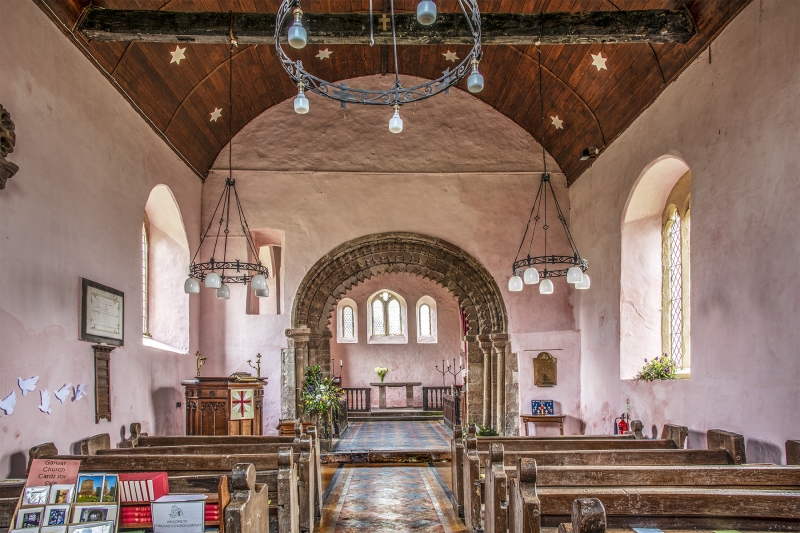 North-west tower has slightly battered
base, two stages with roll-moulding dividing the lower stage from the
slightly recessed upper stage and a pyramidal roof; north-west side has
a single ground floor lancet, a blocked lancet in the lower centre of
the upper stage and two round-headed openings beneath the roof, the last
features recurring on the other three sides; buttress containing newel
with small loop lights projects from east corner towards north-west; south-
east side has small moulded lancet to first stage which is blocked in its
lower half. The tower is linked to the nave by a passage; probably C17,
which contains occasional blocks of tufa and has an entry in the south-west
side. Nave has a blocked north doorway with a 2-centred head behind the
foundations of the circular nave and superimposed north porch which were
excavated in 1927, to the west of which is a 2-light window with Y-tracery,
the bottom part of which has been blocked; the south wall has a pair of C14
trefoil-headed 2-light windows each under a relieving arch and with large
C17 buttresses to either side; C14 west window to south of passage to north-
west tower has 2-centred head and three lights with trefoiled heads, the
central light being taller than the outer ones, C17 west doorway with 4-
centred head, carved phoenix above. Chancel has in its north wall two
restored lancets to the east of a C13 trefoil-headed single-light window, the
bottom half of which is blocked to allow steps to the former rood loft, at
the east end of the same wall is a large C17 buttress; the east wall has a
small round-headed window to each side of a C13 re-set 2-light window with
depressed quatrefoil tracery above, beneath is a scratch cross. South chapel
has two square-headed 2-light mullioned windows, probably C16, set between
three buttresses; C14 east window has 4-centred head, three foiled lights,
probably re-set, and a C16 label with head-stops that to the south mitred
and the other death-like; west wall has another 2-light mullioned C16 window
and a contemporary doorway with a 4-centred head, to the south of which is
a Maltese cross.

INTERIOR: the tower has deeply splayed jambs behind ground
floor lancets and several slab monuments, an eight-foot-long dugout chest,
a 2-centred arch leads to the C17 passageway. Nave has barrel roofed ceiling
and two chamfered tie beams; C12 chancel arch has three orders, the inner two
with detached columns and water-leaf capitals, except to the inner north side
where a grotesque head spouts beaded ornament, patera to north abacus; the
round-headed arch has chevrons to the two outer orders and a flat-faced
moulded inner order in Islamic style; foliated gable cross-finial high up
on north wall, 13 heavy oak benches, probably C17, the ends of which are
shaped towards the aisle only, except for the shorter front four which
have both ends shaped; doorway into passage to tower has a shouldered head;
font, probably C14, has octagonal bowl and steps; C16 water-stoup and C18
table on north side of west door; wall monument, in form of an aedicule,
to John Prosser, died 1737 on south wall. Chancel has three-bay roof with
raking struts from ties to principals and central posts from ties to collars
in main trusses and three alternating intermediate trusses with arch braces
to collars above which angle braces support principals, two rows of trefoiled
wind braces. Dividing the chancel from the south chapel is a C13 arcade of
two bays of 2-centred double chamfered arches separated by a column with
four attached shafts with waist-bands, the responds to the ends of the
arcades having three attached shafts; stoup in north wall with chamfered
2-centred head and part-octagonal drain; medieval mensa, with five crosses,
supported on C20 piers; stone steps to C15 or C16 doorway with 4-centred
head leading to former rood loft; early C18 communion rails with turned
balusters and moulded rails; two pries-Dieu with early C18 balusters;
early C17 chair; C17 panelling to backs of seats; 1880 organ in west arch
of arcade. South chapel has early C20 panelled ceiling, c1400 piscina
with deep trefoiled head, sexfoiled drain and scratch decoration of fish
above, large chest with two lids along south wall and a prie-Dieu with
early C17 balusters. (RCHM Vol I, p 69 - 72).