Church of the Holy Trinity and St Mary

A Grade II* Listed Building in Dodford with Grafton, Worcestershire 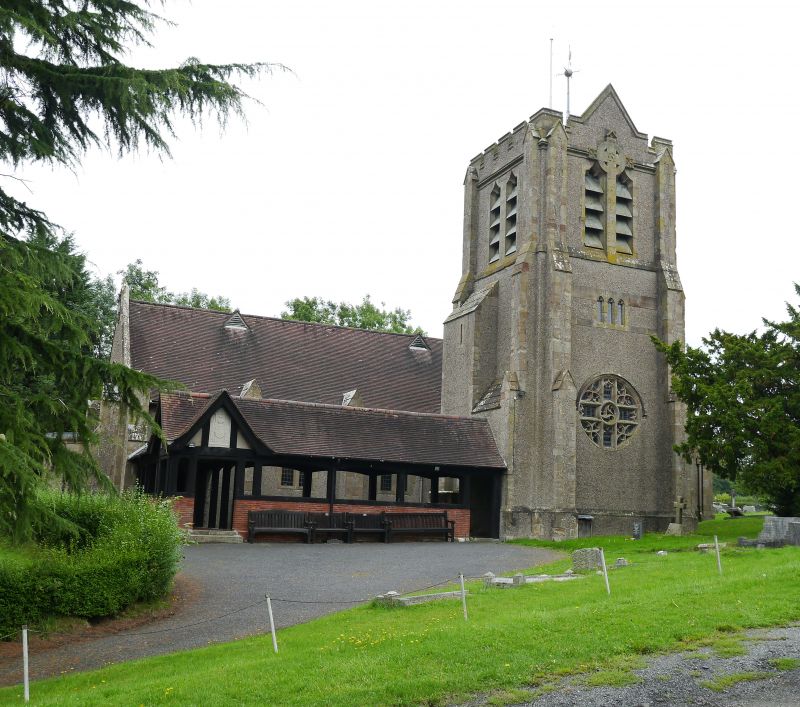 Entry Name: Church of the Holy Trinity and St Mary

9/98 Church of the Holy Trinity
and St Mary

Parish church. 1907-8 by Arthur Bartlett for the Rev W G Whinfield. Pebble-
dashed brick with ashlar dressings; plain tiled roofs with gable-end parapets.
Three-bay nave with west baptistry, south transept terminating in south tower
(and connected to nave by arcaded timber passageway forming south courtyard)
and north organ chamber; three-bay chancel with south chapel and north vestry.
Arts and Crafts style. Nave: continuous chamfered plinth; gabled buttresses
with offsets at bay divisions, set back at west corners; 7-light west window
with 4-centred head and hoodmould; above in gable apex is a cusped niche con-
taining figure of The Good Shepherd on a sheep's head corbel. North elevation
has three pairs of cusped lancets, south elevation has two pairs of cusped
lancets and main entrance with pointed and moulded doorway; to upper right of
doorway is a 2-light window with cambered head. There are two gabled louvred
openings either side of the roof ridge. West baptistry projects beneath west
window; canted with flat roof and cusped lancet in each angle; the lead guttering
is decorated with reliefs symbolising water (a lily, fish etc). South transept
is of one bay with a cusped lancet on its west side. The south tower is of two
stages with an intermediate band and chamfered plinth; set-back gabled buttresses
with offsets at south corners; lower stage has rose window in south elevation;
above it, and also in the east elevation, is a row of three cusped lancets; the
west elevation has a shallow lean-to at the left side rising to the intermediate
band; this houses the tower stairs and at the base is a pointed doorway and outer
pulpit facing the courtyard. To the right is another lean-to, lower in height
with a large pointed doorway. The belfry stage has a pair of large cusped louvred
bell-chamber openings on each face and on the south side is a large cross relief;
above is a moulded cornice and saddleback roof with embattled parapets to the
east and west. The arcaded passageway connects the south and tower doorways; it
has cambered-headed archways and chamfered posts (on brick base to outer arcade);
the plain tiled roof has swept eaves and is gabled at the south-west corners;
in the south gable is the Whinfield coat of arms and in the north gable a Virgin
and Child relief panel; the roof has a sandstone tunnel vault and shallow ogee-
headed archways at each end. The organ chamber projects to the north-east; single
storey and attic with dentilled eaves cornice; window in north end and west side
on ground floor and also attic lights; windows are all 2-light cavetto mullioned
type; north end doorway. Chancel: set back gabled buttresses with offsets at
east end; plinth band is stepped to accommodate east end datestone inscribed:
"ADMS/ July 25th 1907" (AD MAJOREM DEI GLORIAM); tripartite east window with
central window of three lights and flanking two lights, 4-centred head and hood-
mould; loophole in apex; small 3-light window with cambered head to north-east,
cusped lancet to south-east. South chapel: two bays, separate gabled roof (with
embattled south parapet) and lying parallel to chancel; set back gabled pilaster
buttresses to south-east corner and two large south pilaster buttresses; 3-light
east window with hoodmould and cusped lancet at centre of south elevation.
North vestry: adjoins organ chamber; single storey and attic with dentilled
eaves cornice; north end doorway and attic light; 3-light cavetto mullioned east
side window. Interior: carving and decorative work by the Bromsgrove Guild.
Nave roof has 4-centred diaphragm arches with square foliated relief panels
decorating the intrados of each; south chapel has quadripartite vaulted roof;
barrel roofs elsewhere; wall-plates have carved relief panels; 4-centred arch
to organ chamber decorated with putti heads. Rood beam has gilded relief
panels and a richly decorated central cross. Organ balcony carved with
figures and musical instrument reliefs. Simple octagonal font noted as
being of C18 origin. Three-sided pulpit has figure corbels, marquetry and
linenfold panelling. The church is one of the best of its date in the county.
Its plan form and tower are of an unusual and most effective design and the
understated but thorough attention to the decorative detail of the interior
is particuarly interesting (BoE, p 132).