A Grade II* Listed Building in Dodford with Grafton, Worcestershire 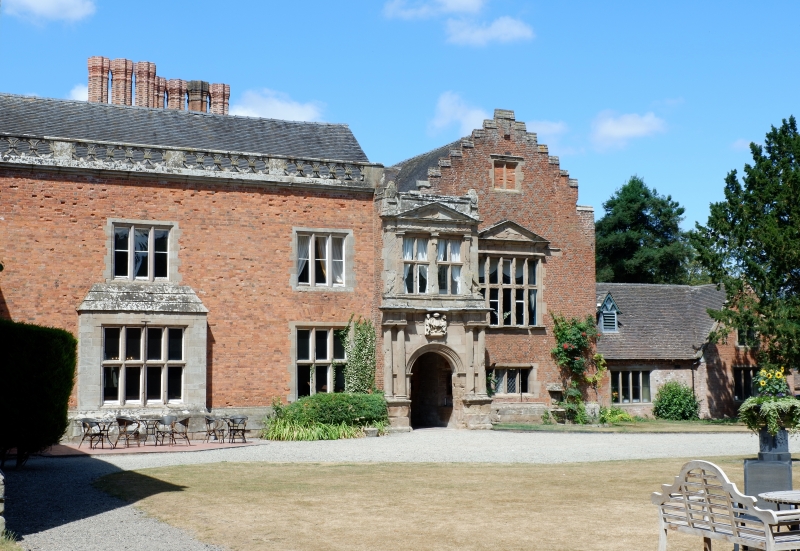 In the entry for DODFORD WITH GRAFTON CP GRAFTON LANE
(north side)
11/84 Grafton Manor, and
Chapel adjoining to
south-west (Formerly
listed as Chapel at
Grafton Manor House)

The grade shall be amended to read: II* (star)

SO 96 NW DODFORD WITH GRAFTON CP GRAFTON LANE (north side)

House, now restaurant and hotel, and adjoining chapel. Early C16, altered
and extended c1567, partly destroyed by fire in 1710, partly rebuilt and
interior remodelled c1860 by David Brandon; restored late C20. Brick, mainly
handmade, with ashlar dressings, some stone facing on sandstone base; plain
tiled and slate roofs behind balustraded parapet to front and with some gable-
end parapets; massive chimneys, mainly external, with groups of star-shaped
and large single stacks. L-plan; main two-span range aligned east/west with
upper parlour cross-wing at east end separated from main part by prominent
stone-faced porch wing; south wing at west end. Two storeys, basement to
north elevation, attic with crow-stepped gabled dormers to west elevation;
chamfered stone plinth, blue brick diaper patterning to C16 brickwork and
moulded stone eaves cornice to front elevation. South-east entrance front:
largely rebuilt mid-C19 (apart from porch and gable end of cross-wing);
ovolo-moulded stone mullioned windows (with transoms on ground floor); main
range has a 4-light bay window, a 3-light and a single-light window on the
ground floor and on first floor are two 3-light windows and a single-light
window. Cross-wing gable end to right has a crow-stepped gable, a 4-light
mullioned basement window to right of which is a reset stoup with a shell
basin beneath the figure of a woman set in front of a large swagged relief;
above the figure is a domed canopy. Above is the upper parlour window of
five lights with roll-moulded mullions and fluted transom; it is surmounted
by a frieze and pediment containing an animal relief (probably a Talbot dog);
on the frieze an inscription reads: "Plenti and grase ti in this plase whyle
even man is plesed in his degre there is both pease and uniti. Salaman saith
there is none acorde when even man would be a lorde". In the attic of the
gable is a blind 2-light window with a moulded cornice. The porch wing is
dated 1567; two storeys with panelled parapet and corner finials with urn
reliefs; it has a moulded round-headed archway with impost string, flanked
by coupled fluted Doric columns on pedestals supporting a triglyph frieze;
above the archway is the Talbot coat of arms with the date 1567 written on
the base. On the upper floor three fluted pilasters frame two mullioned and
transomed windows and support an entablature with strolled Vitruvian relief
on the frieze and a pediment, inset into the parapet and containing a roundel.
The east elevation of the south wing has five ground floor windows and six
first floor windows; in the fourth bay is a round arched entrance with moulded
keyblock, large tapered pilasters on pedestals with strapwork relief decoration
and half-glazed C20 double doors. Interior: remodelled c1860. Upper parlour
retains large C16 plaster coat of arms above the fireplaces At the south end
of the south wing a small Cl6 single-bay wing of two storeys with a crow-stepped
gable and C18 sash windows links the main building with the Chapel: early C15
with early C18, early and mid-C19 alterations. Dressed coursed sandstone rubble
and sandstone ashlar with sandstone ashlar dressings, slate roof with gable-end
parapets and cross finial at east end. Continuous nave and chancel of three
bays with west bell-turret and south porch. Perpendicular and Gothick styles.
Continuous chamfered plinth. Diagonal buttresses with offsets at ends. Windows
restored early C19, all large with pointed heads; 4-light window at east and
west end, 3-light windows in side elevations, (one in north side, two in south
side). West bell-turret is gabled and has a pair of pointed openings and one
surviving bell. South porch added early C19; square plan with roof concealed
behind prominent embattled parapet; diagonal corner buttresses; pointed hollow-
chamfered archway, narrow cruciform openings in side elevations. Pointed arched
doorway within. Interior: Gothick style; plastered throughout; barrel roof with
plaster quasi-vault, gilded bosses and panels painted with stars above altar,
(this probably replaced original C15 roof destroyed in 1710 fire). Blocked
window to north-east and blocked north doorway. West gallery is early C19 and
is supported on a three-bay ogee-arched arcade with moulded slender posts of
quatrefoil section and trompe d'oeil coats of arms painted in spandrels;
traceried gallery balustrading; dog-leg staircase in south-west corner with
pointed-arched balustrade and wreathed and moulded handrail leads up to gallery.
A doorway with a 4-centred head in the north elevation leads into the south wing
of Grafton Manor and to a mid-C19 lean-to vestry and staircase. Grafton Manor
was the seat of the Talbot family who became Earls of Shrewsbury. The estate
was given to Sir Gilbert Talbot by Henry VII after the Battle of Bosworth and
it remained in the family for 400 years. John Talbot inherited the estate
in 1555 and added the porch, the upper parlour and laid out the grounds. It is
probable that the rebuilt entrance elevations were refaced with stone at this time.
(VCH 3(i), p 123; BoE, p 157; The Birmingham Post Booklet: Grafton Manor: a short
history, 1980).