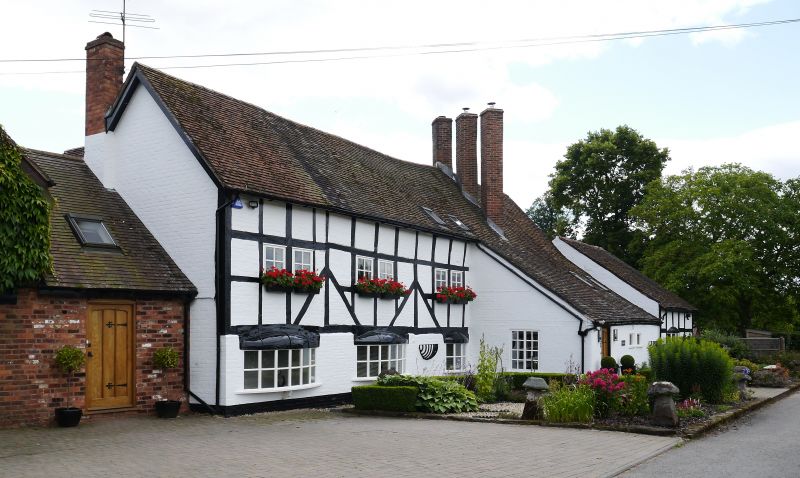 A multi-phase former farm complex with a house dating principally from the C17 and attached barn range thought to date from the late C18 or early C19.

A multi-phase former farm complex with a house dating principally from the C17 and attached barn range thought to date from the late C18 or early C19.

MATERIALS: the farmhouse is constructed primarily of a timber frame, which sits in part on a stone plinth, and part brick. The barn range is of brick with timber roof structures. All are under tile roofs.

PLAN: the farm complex is L-shaped on plan, with the farmhouse aligned roughly east-west, and the barn range extending south from the east end of the farmhouse.

EXTERIOR: the farmhouse, now known as the Old Well House, is approached from the north, on which side three bays of its timber frame are exposed. The ground floor is of brick with three mid-C20 oriel windows, and the framing above is three square panels high with straight tension braces and brick infill and three paired casement windows. To the west there is a brick extension with a catslide roof which contains the main entrance and the roof above this has three tall diamond chimney shafts. The western end has a further extension with applied timber framing. Both gable ends of the main house are brick.

The southern elevation of the house is primarily of brick, although sections of external stone walling survive, now within the modern conservatory addition which is attached to the western end of the house. The fenestration is irregular and mainly consists of casement windows in cambered-head surrounds. The second floor has two multi-pane windows, one of which is a horizontal sliding sash. There is a projecting gabled extension at the east end and in the angle between this and the main house there is a projecting curved window at first-floor level.

The northern end of the barn range forms the garage to the Old Well House, with a modern garage door in its gable end and a single window and the remains of a hoist above. The western elevation of the barn range is of brick with some evidence of sections of rebuilding. The central portion has some ventilation holes surviving in the brickwork and some engineering brick in rows alternating with red brick. At the southern end, the rear of what is now Meadow Barn has brick dentilled eaves laid diagonally.

To the east, there is a further modern garage door towards the northern end of the barn. Beyond this is the section now known as Broome Barn. This has large window and door openings where the central barn doors would have been, and further windows with cambered heads and a door to the right.

Meadow Barn at the southern end is joined, but of separate construction from the main barn and stands slightly further east. It has piers with rounded edges probably denoting the location of a former open-sided cow shed.

INTERIOR: The Old Well House is entered through the lean-to extension at its western end which contains a modern stair and has sections of exposed stone walling at first-floor level. At ground-floor level, the main building is effectively divided into three rooms, with further rooms in the extension to the west. The original external wall at the western end has its stone walling exposed in places, with various openings and a principal beam, chamfered with runout stops, which appears to be a replacement of an earlier, larger beam. There is a large axial stack with back to back fireplaces, and a large timber lintel over the fireplace, chamfered with a step stop at one end. The next room has another large lintel over the fire with step stops and numerous markings along the lintel. The main ceiling beam is chamfered with step stops, and the joists are not chamfered. In this room a brick stair gives access to a two-roomed cellar below with brick walls and barrel-vaulted ceilings. Beyond at ground floor, sections of the timber frame are exposed with evidence of the pegged construction in situ. Beyond this, the infilled section between the house and the barn contains a modern stair which gives access to the upper floor of the barn.

The first floor of the house has much exposed framing with ceilings beams chamfered with either runout or step stops. There is one fireplace with a modern inserted surround beneath an older chamfered lintel. The main bedroom has a substantial section of framing exposed which clearly shows the original pitch of the roof before the height was raised. At second-floor level, the base of the diamond chimney stacks can be seen in what is now a small cupboard with framing exposed, where it appears the roof has been raised around the stack which already existed. The bedroom adjacent again shows the raising of the roof with two sets of principal rafters and large purlins which may have been re-used. The roof at the far eastern end of the building is modern and the gable end wall is blockwork internally.

The garage which forms the northern end of the barn range also has sections of blockwork construction with some brick and a large chamfered beam supporting the first-floor ceiling. The roof structure of the upper floor suggests that the northern end may have been extended or rebuilt, with a later truss and purlins at a different level from those adjacent.

The interiors of Broome Barn and Meadow Barn have been converted to residential use and appear to retain no historic features of particular note other than the surviving roof structures. The trusses in Broome Barn are of queen-post construction and retain historic purlins. In Meadow Barn the trusses are king post with struts, and this roof retains its purlins and most common rafters.

The Old Well House, Broome Barn and Meadow Barn comprise a farmhouse with an attached barn range, which has been converted into separate dwellings.

The oldest part of the complex is the farmhouse itself, now known as the Old Well House, which in its present form dates principally from the C17 but with possible earlier origins, and with later alterations. The barn range appears to date from the late C18 or early C19, although it is possible that it re-uses parts of an earlier structure.

There is little documented history available relating to this site. The complex is shown on the 1838 tithe map for the parish of Broome, at that time in the county of Staffordshire, and the house and barn range appear in much their present format on this map, including the separate building to the north, now known as The Heritage, and two additional buildings to the south-west which no longer survive. The tithe apportionment document shows that the farm at that time was owned by the estate of the Earl of Dudley and was described as 'house, outbuildings and yard', occupied by Edward Amphlett.

From the visual evidence surviving in the buildings, it would appear that the western end of the farmhouse is the oldest part, with sections of substantial sandstone walling which may survive from an earlier building. The principal timber-framed structure dates from the C17, and appears to have been raised in height fairly early in its history. The southern elevation has been rebuilt in brick, probably around the late C18 or early C19, and it seems possible that the barn range assumed its current form at around the same time as this.

The 1st Edition Ordnance Survey map of 1883 shows the farm buildings in the same layout, with the name as Broom Farm. By the 1971 OS map the name has changed to The Old Well, and the barn range and house appear at this time to only be connected by a single wall. The two buildings to the south-west have also gone by this date. In the late 1990s, the barn range was converted to domestic use, with two separate dwellings at the southern end and the northern end forming part of the Old Well House property. The space between the barn and the farmhouse has also been infilled with a modern structure connecting the two.

The Old Well House, Broome Barn and Meadow Barn, a farmstead dating principally from the C17 with a multi-phase farmhouse and attached barns, are listed at Grade II for the following principal reasons:

* The farmhouse is a good example of a vernacular, multi-phase house where it is possible to identify different phases of construction, which gives considerable interest;
* The attached barns, despite conversion to domestic use, retain architectural quality and the character of historic agricultural buildings;
* The buildings retain much historic fabric of interest, particularly in the early stone and timber structures of the house, and the timber roofs and historic brickwork of the barns.

* Despite the loss of some buildings and conversion to different uses, the farmstead survives as an example of a substantial principal house with attached barns of good quality;
* The rebuilding of the southern elevation of the house in brick with the brick barn range is a good example of farm improvement of the late C18 or early C19.