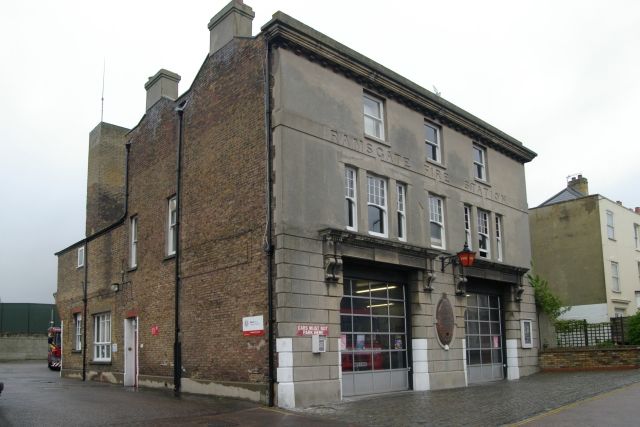 C18 house converted and extended in 1905 under the direction of Borough Engineer T G Taylor to serve as Ramsgate Fire Station.

Early to mid-C18 house converted in 1905 under the direction of Borough Engineer T G Taylor to serve as Ramsgate Fire Station.

PLAN: three-storey, double-range house running parallel to Effingham Street with a range to the rear with a hose-drying/drill tower. The two-bay ground floor is mainly occupied by the engine house/appliance bay which fronts onto Effingham Street. A control/watch room is set to the rear on the south side with a shallow single-storey projection to the north; this originally for taking in the horses from the rear yard. Above, on the two upper floors are the dormitories, a mess room, kitchen and kit room for the brigade.

EXTERIOR: the principal façade has a rusticated ground floor with a cill band, a plat band with ‘RAMSGATE FIRE STATION’ inscribed on the second floor and a modillion cornice parapet with stacks to the left and right. The second floor has three evenly-spaced sashes, with a pair of tripartite sashes flanking one central single sash on the first floor (the upper leaves with glazing bars), these with incised keyed lintels over. Two large, replacement glazed metal carriage doors occupy the ground floor with heavy cornices on double brackets marking these out. The piers to the carriage doors have rounded edges, to prevent scuffing. Set between the carriage doors is a central oval bronze dedication plaque with a fire bell button (since lost) in a keyed surround which records the date of opening (17 October 1905) and the town dignitaries present. Above the plaque is a wall-mounted fire lamp.

The rear elevation is comprised of a combination of later C19 additions and some rebuilding and new fenestration from 1905. The two-storey, shallow-pitched rear wing (extending from the south-west corner of the C18 core of the house) was added by 1873, although its present form is principally a product of the 1905 scheme. The most notable element of this projection is the four-storey hose-drying/drill tower at its west end, which is of stock brick with openings on its west face marked out with glazed purple bricks (the openings all fitted with modern metal shuttering). The projecting wing has a chamfered corner at ground-floor level, occupied by a narrow plank door to the workshop/store and sheltered by a stepped-brick projection. The north side of the rear elevation has a projecting single-storey range of 1905 with double carriage doors giving access from the yard to the appliance bay. Above this are two broad rendered bay windows. The central sashes of these bays have been replaced with escape doors and most of this portion of the elevation has been obscured by external metal stairs, added in around 1980. The side elevations are of plain yellow brick, with some rebuilding and repointing to the gable ends on both sides; the southern elevation with two narrow inserted sashes to the first floor and a door to the watch room to the west.

INTERIOR: the appliance bay or engine house is simply divided into two carriage bays, with a cast-iron column with an acanthus leaf capital supporting a riveted steel transverse beam in the centre. The appliance bay walls have mottled teal tilework with brown border tiles to dado level. To the rear of the appliance bay, set centrally, is a stone, open-well staircase with decorative cast-iron splat balusters and a hardwood handrail which is turned around a curtail step at the base; this is probably retained from the original Effingham House arrangement. The watch room (control office), to the south of the stairs, has simple tongue-and-groove dado panelling, built-in cupboards and a pair of part-glazed panelled doors; one to the appliance bay flanked by narrow margin lights and another to the west side, which is set within a multi-paned glazed screen (this separating the watch room from a distinct workshop/store which can be accessed from the rear drill yard).

The upper floors retain several simple four-panelled doors, fragments of tongue-and-groove panelling, a series of window and door surrounds, skirting and some plaster cornice detailing; most of which appears to belong to the conversion of 1905, although it is possible that some earlier joinery may have been reused and some of the plaster work is potentially of greater age. A notable feature, contained within the rear dormitory room on the first floor, is a blocked and partly obstructed fireplace with a fine Adamesque surround featuring swags and floral ovoid motifs to the architrave (another probable early fixture from Effingham House). The hose-drying/drill tower and the workshop/store within the rear range were not inspected internally.

SUBSIDIARY FEATURES: a simple single-storey, flat-roof kit store of around 1930 is situated in the north-west corner of the rear yard; this does not contribute to the special interest and is not to be treated as part of the listed building.

Ramsgate is situated on the east coast of the Isle of Thanet, facing France and the Low Countries. Originating as a fishing village within the medieval parish of St Laurence, Ramsgate’s development from the C16 was driven by the strategic importance of its coastal port. Late C17 trade with Russia and the Baltic resulted in a wave of investment and rebuilding in the town. In 1749 the construction of a harbour of refuge from storms in the North Sea and Channel was approved, and a cross wall and inner basin were completed in 1779 to the design of John Smeaton. Later improvements included a lighthouse of 1794-1795 by Samuel Wyatt and a clock house of 1817 by Wyatt and George Louch.

Into the mid-C18 Ramsgate became increasingly popular as a seaside resort, its expansion being accelerated by road improvements and faster sea passage offered by hoys, packets and steamers. In the town, an assembly room, warm water baths, subscription libraries and places of worship were joined by new streets such as Effingham Street; which became the most desirable residential street in the town. The present fire station building, initially known simply as ‘Effingham House’ was in the C18 the house of Admiral William Fox (1733-1810). By 1829, the house had been acquired by Richard Tomson of the local brewers Tomson and Wotton and some modifications and minor extensions to the rear of the house were made in the decades that followed. The house had, until the end of the C19, extensive grounds to the rear which extended to the west and north as far as Elms Avenue and Clarendon Gardens; this land was subsequently parcelled off to become the site of Clarendon House School and Ramsgate Library.

As the town grew following the arrival of the South Eastern Railway’s branch line in 1846, a series of major urban improvements were made. The construction of Royal Parade and landscaped paths to join the upper promenades to the seafront and Undercliff walks responded to and encouraged the town’s burgeoning tourist industry, whilst new hospitals, schools and services were established to serve the expanding permanent population of the town. During this period of investment, the Effingham Street site was acquired for the Ramsgate Fire Station, with conversion and significant rebuilding work conducted in 1905 under the direction of Borough Engineer T G Taylor. A plaque affixed to the façade records the opening of the station by the Mayor, R Dowling Esq, on 17 October 1905.

The Ramsgate Station opened at the beginning of a period of transition for fire stations across the country. In 1905, the Red Lion Street station in Wapping became the first to be designed specifically for motorised fire engines, setting a precedent for brigades across the country. Bromley was the first brigade in Kent to acquire motorised engines in 1910, with Ramsgate following five years later when Dame Janet Stancomb-Wills, a member of the town council and a major benefactor of the town, donated funds for this purpose. The transition towards the use of motorised engines came too late to influence the design of the Ramsgate Station, which was arranged along the lines of standard mid-sized stations of the late C19 to accommodate two horse-drawn fire carriages. A narrow range to the western end of the site, consisting of several small outbuildings and an enclosed yard is shown on the Ordnance Survey (OS) map of 1907 (Kent, 1:2500). This may have been the stabling block for the station, possibly converted from earlier structure associated with Effingham House which is shown on the OS map prior to the 1905 conversion (Kent, 1896, 1:2500). Into the later C20 the additional buildings on the station plot were cleared, including a narrow building at 18 Effingham Street, which is shown on OS maps until 1978.

Elements of the external form, roof structure and some internal fittings appear to survive from the early to mid-C18 house. However, most of the existing station is the product of the 1905 conversion. The main operational area (the appliance bay/engine house), control office and hose-drying/drill tower remain with only minor alterations since 1905. Some later modifications have been made to the upper rooms, with an arrangement consisting of mess rooms, kitchens and changing areas and dormitories with modernised kitchen and toilet facilities along with later external stairs (added around 1980) to the rear of the building.

Ramsgate Fire Station on Effingham Street is listed at Grade II for the following principal reasons:

* as a well-preserved fire station of 1905, adapted from a large C18 house, retaining a range of distinct features from both periods.

* as a clearly legible example of how local brigade fire stations were planned and operated in the early C20.