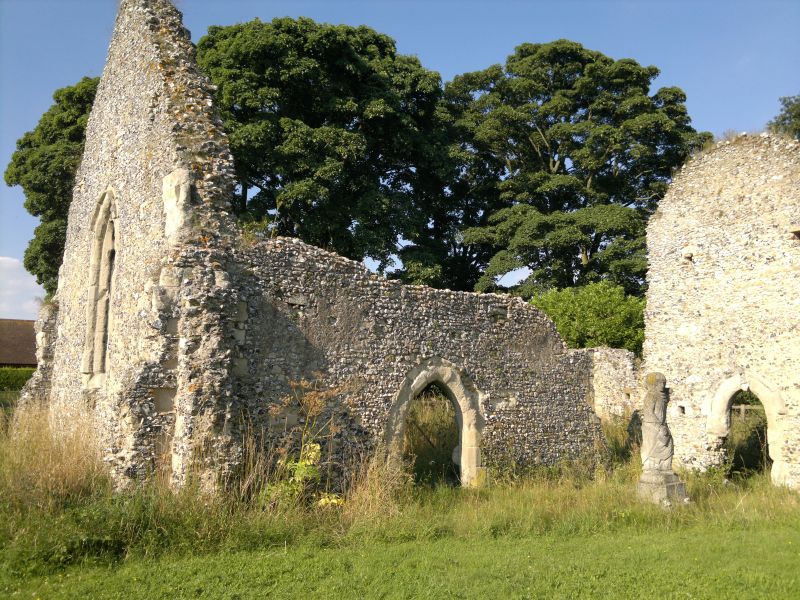 Ruined church. C13 or early C14, SE chapel mid C14, dismantled 1750 by
licence of Bishop of Lincoln, ruins consolidated in 1980s. Flint rubble
walls with clunch dressings, chapel walls have many pebbles. Unroofed.
External plastering remains on some walls, internal plaster has traces
of painting to simulate masonry on N and S walls of nave. A large
rectangular church, internally 50ft x 18½ft, of nave and undivided
chancel, with angle buttresses. Added SE chapel of equal height,
internally 21ft x 13ft, with diagonal corner buttresses, and E wall
in line with the E wall of the church. Chapel floor at present ground
level but church nave floor buried by about 1½ft. W gable walls of
church and chapel stand to full height, N and S walls of nave, and W
half of S wall of chapel also, NE angle of chancel is nearly complete,
but walls elsewhere are reduced to ground level and have been marked out
with consolidated walltops. The standing walls have putlog-holes at 3
levels with clunch surrounds. Wide, 2-centred, N and S doors to nave
with continuous external chamfer, scroll-moulded external drip, and
internal door checks. Long bar-slot in N wall in E jamb of doorway.
Remains of jamb and sill of a N and a S window, and a tumbled section of
wall lies within the chancel. Tall narrow 2-lights W window has
continuous splay-stones in the head but has lost its central mullion.
Stubs of tracery show it had cinquefoil heads to the lights and a
quatrefoil above in the head. Similar but narrower doorway in middle of
W wall of chapel has continous chamfered jambs with doorcheck, but a
pointed segmental rear arch and exposed threshold. Single-light narrow
pointed cinquefoil window in remaining half of S wall. Straight joint
between W wall of chapel and S wall of nave. Slate tablet set on floor
of nave inscribed, 'SAINT ETHELDREDA/BY BIRTH PRINCESS/BY MARRIAGE
QUEEN/BY CHOICE ABBESS/630 - 679/HER PARISH CHURCH/FOR THE PEOPLE OF/
CHESFIELD MANOR/DOUNE RUINATED/AND PLUNDERED 1750'. A stone coffin was
noted in a hole in the chancel by RCHM (1911:93) and VCH (1912:90).
Statue outside W door of chapel a standing figure of St. Etheldreda on
an inscribed plinth by Mary Spencer Watson 1982. There is documentary
reference to a chapel at Chesfield manor in 1216 which may have preceded
the church for the deserted medieval village of Chesfield the ruins of
which remain. (RCHM (1911)93: VCH (1912)90: Kelly (1914)105: Pevsner
(1977)149: inf Mr. George Seebohm).