Brick and Tile Kiln Including Chimney 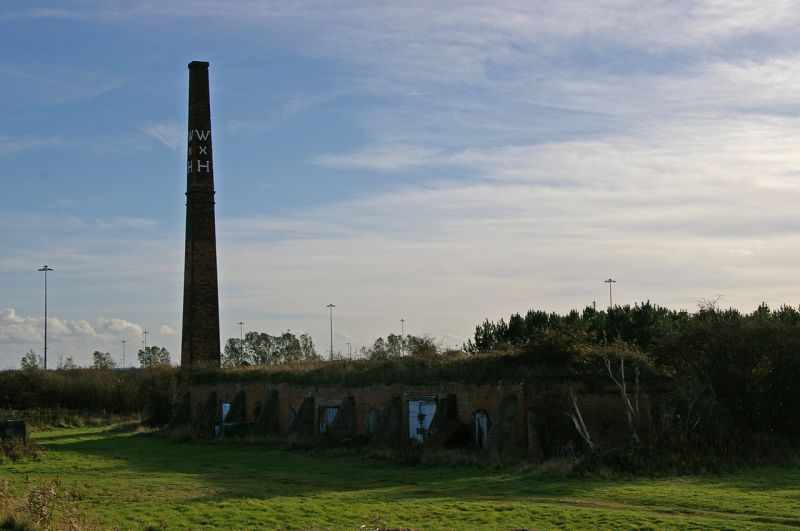 Brick and tile kiln and associated chimney. Early C20 for Wilkinson and Houghton Ltd.
Red brick, with concrete buttresses to kiln. White brick lettering to chimney. Kiln
rectangular on plan, aligned NW-SE, approximately 45 metres long by 7 metres wide
and 3 metres high, containing 8 adjoining barrel - vaulted chambers with openings
to each side; detached square-section chimney approximately 7 metres to south east.
Kiln: north-west and south-east sides of 8 bays, with buttresses between bays,
round -headed openings to chambers with round-chamfered arches beneath tile hood-
moulds, concrete coped walls. 2 openings on north-east side and 1 on south-west side
have doors beneath inserted lintels. North-west and south-east ends have similar
buttresses to left and right, with a pair of smaller buttresses between. Flat roof,
grass covered. 2-stage tapered chimney, approximately 27 metres high, with chamfered
angles, plain and stepped brick bands between stages, company initials
w
x
H in white brick to north, south and east sides of upper-slam, brick cornice to top.
Steel girder from south-east end of kiln attached to chimney. Flue from kiln beneath
ground level. Ceased operating c1939. The largest surviving brick and tile kiln on
the Humber Banks, and the only example of this design to have been built in the area.