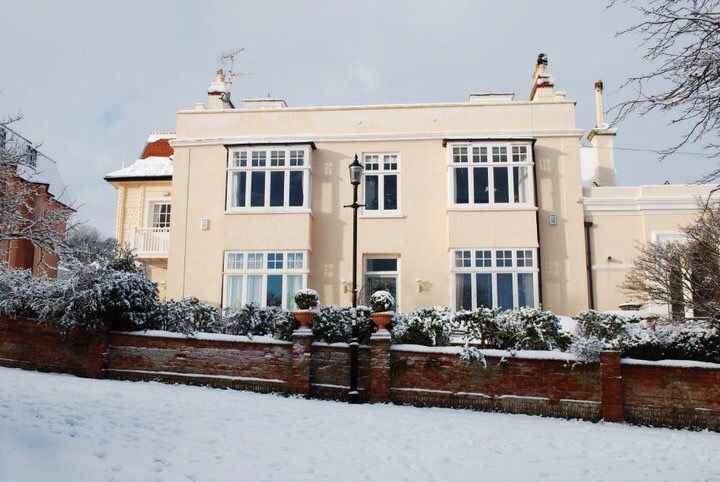 Plan: The original circa 1830 house is double depth with 2 principal front rooms,
a central entrance hall and probably service rooms at the back. In 1882 a single
storey Gothic style library wing was built on the right hand side of the house;
this was a large single room. Probably a little later in the C19 a Swiss-chalet
style pavilion was built on the left hand side of the house; it has a square
small one-room plan with external stairs at the front to the first floor room.
In circa early C20 2-storey bay windows were added to the front of the original
circa 1830 house.

Exterior: The original house is 2 storeys and attic, with a 3-window front.
To the left and right of the front there are circa early C20 2-storey square bay
windows either side of a central doorway with a glazed door with a rectangular
fanlight and a circa early C20 2-light mullion-transom window above. The high
parapet with a moulded cornice conceals 2 flat-roof dormer windows with casements
complete with glazing bars. The parapet at the gable ends is stepped and there
is a small round-headed attic window in the left hand gable end.

Set back on the left hand end of the house there is the late C19 2-storey pavilion
in a sort of Swiss chalet style which appears to be stuccoed with applied timber
framing and it has a sprocketed gableted roof, the gables tile hung and the left
hand side with a similarly tile-hung projecting gable to an oriel window which
has lattice glazing. On the front of the pavilion an external flight of wooden
stairs up to the first floor doorway with a canopy above.

On the right hand side of the house Dr Brushfield's single storey library: stuccoed
and with a parapet and a moulded cornice which breaks forward at the front over
a slightly advanced centrepiece with a tripartite Gothic window with a bracketed
cill and hood-mould. The rounded right hand corner of the library is recessed
and contains a round-headed niche and a small blind quatrefoil above. The moulded
cornice continues around the corner into the right hand elevation and around a
rectangular bay projecting across the rear corner; the bay has a bowed window
on its front and a 2-centred arch doorway in its left side. There is a roof lantern
lighting the library.

The rear elevation was not inspected.

Interior: Only the interior of the library is described. It is top-lit from a large
square lantern. The ornamental wooden panelled ceiling has pendants, bosses and
small arch braces supported on panelled piers. There is a fine tiled cast-iron
chimneypiece, the tiles decorated with classical motifs, and a cast-iron grate.
The windows retain their attractive stained glass in geometric patterns and armorial
bearings. The bookcases have been removed, in spite of which this is a most complete
interior.

The interior of the pavilion and the mail house were not inspected and may well
contain features of interest.

Historical note: The Cliff was the house (from 1882 to 1910) of Dr T N Brushfield,
an antiquarian, a notable local historian, an authority on Sir Walter Raleigh
and third largest contributor to the Oxford Dictionary. This library was built
to accommodate his collection of over 10,000 books and manuscripts. The construction
was carried out by Jacob Cowd, builder and William Keslake, carpenter. The Cliff
is also said to have been a private school in the C19 (presumably before 1882)
called 'Academy for the Sons of Civil Servants in India'.

Source: Information provided by P Norman and E Spurway of Budleigh Salterton
from a text by the late J Gooding.