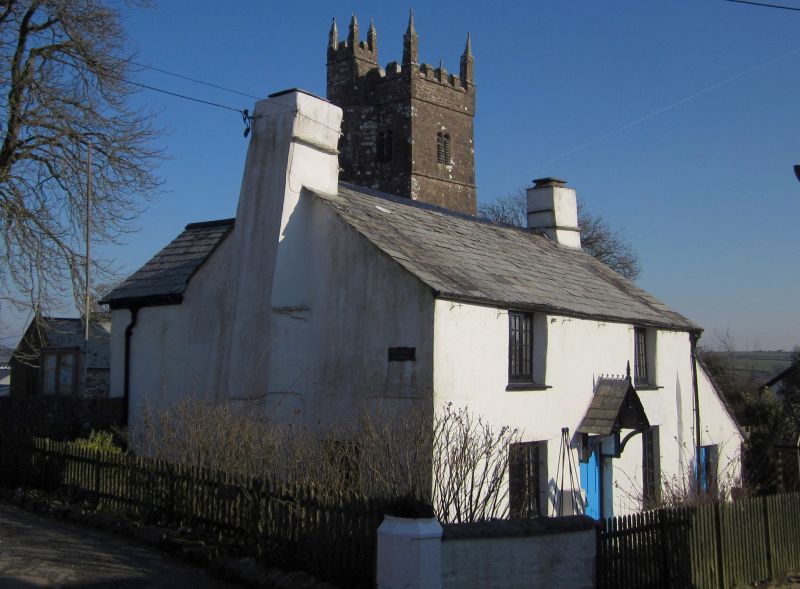 MATERIALS: Whitewashed stone rubble and cob with a slate roof. C19 extensions to the rear of stone rubble.

PLAN: Two storey house with a two room plan with a central cross passage. The northern room and chamber above have been enlarged by one narrow bay to the rear under a gabled roof. The rest of the rear wall has been replaced by timber framed wall and a narrow service extension built across the rear as far as the end of the northern bay. There is a single storey outshut on the south end under a lean to roof. Contained within the central block are the timber remains of a hall house with an original two room and cross passage plan, with an undershot cross passage and a service room at the south end with a solar above, and open hall to the north.

EXTERIOR: A two-storey roughly symmetrical front with a wide central panelled door with open timber and slate canopy. The four front windows are C20 century timber casements with glazing bars, with similar windows on other elevations. There is a left gable end projecting stone stack with set-offs and brick chimney shaft and a rendered stack to the right gable. There is a single storey lean-to to the right.

INTERIOR: The main block contains the substantial remains of the late medieval three bay open hall house, with a solar at the southern end projecting over the former cross passage. The hall occupied the northern end bay. It was originally open to the roof, with the first-floor evidently inserted when the projecting rear cross wing extension was added, probably in the C17. The northern gable end fireplace and chimney breast were probably added at the same time. The large inglenook fireplace, with later bread oven door, were exposed in renovations.

The stairs rise on the inside back wall from the northern room to the first-floor landing, which provides access to three first-floor chambers in the main block and a further room in the rear extension. The first floor is carried on a series of massive joists running axially along the building from the south end wall, jettied into the original hall.

The roof is constructed of relatively large timbers and remains largely a medieval structure, although the outer walls were raised slightly and new timbers added to the original ones to lower the pitch when the original thatch covering was replaced with slate. Three bays are carried on oak upper cruck trusses. The northern and western trusses are of similar construction with principles joined at the apex in a vertical butt joint secured by a horizontal slip tennon fixed by a peg on each side of the butt. The trusses support two sets of threaded purlins and a clasped diagonally set ridge. The common rafters, are relatively wide and meet over the ridge where they are edge halved together and held by a horizontal peg. There is some soot blackening to the structure. The third truss, against the south wall is only partially exposed and of different construction with the purlins resting on the back of principle rafters; it may be a later insertion to provide additional support for the purlins at the south end.

Structural evidence suggests that the cottage was widened by rebuilding the rear wall and extending the roof over it, at some time after the cross wing had been added and the hall floored over. Finally, the lean to extension and second chimney breast was added to the south gable.

SUMMARY OF IMPORTANCE: Bell Tower Cottage, a two room cross passage former farmhouse dating from between 1420 and 1540, is of special architectural interest on account of its rare variant plan form, including undershot passage arrangement, the range and quality of its structural carpentry (notably the roof structure and upper floor carpentry) and its remarkable degree of completeness, which allows the origin and development of the building to be read with such confidence. Medieval two room and cross passage houses are rare nationally and most so far identified are listed, some of them at higher grades. The rare plan form, the quality of structural carpentry and degree of completeness at Bell Tower Cottage give the cottage more than special interest and it should therefore be regraded to reflect this.