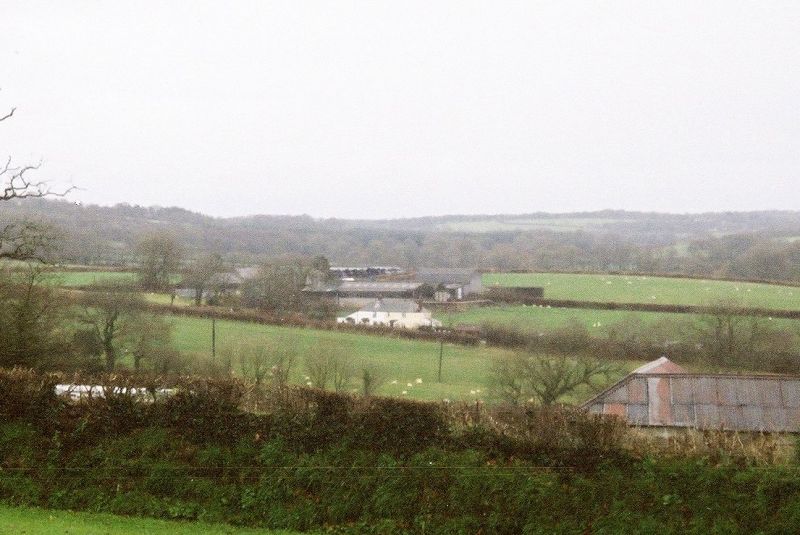 Farmhouse circa late C17 core, circa mid C19 addition. Stone rubble probably with
some cob under the eaves, slate roofs, the C19 wing hipped at ends, the main range
gabled at the left end, the left end slates replaced with corrugated iron. Axial
brick chimney shaft to main range, rendered stack at front end of C19 crosswing,
projecting stone stack with set-offs at rear end of C19 crosswing.
The main range was originally a late C17 2 or 3 room and through passage plan, the
lower end under a corrugated iron roof is now in use as an outbuilding and does not
appear ever to have been heated. The hall stack is at the inner end of the hall.
There may have been an inner room to the C17 range but this is not certain as the C19
crosswing to the right abuts the inner end of the hall at right angles forming a T-
plan. Rear service rooms including a former dairy were added to the rear of the main
range, probably in the C18, under lean-to roofs. A stair was inserted in the through
passage in the early C20.
2 storeys. The main range is approximately symmetrical with a central gabled open-
fronted stone porch and a C20 front door. A barn door to the left leads into the
lower end. First floor window left above the barn doors is a 3-light casement under
a timber lintel. First floor window above the porch is a 2-light casement, 6 panes
per light, ground floor window right is similar. The left return of the crosswing to
the right has C19 casements, 4 panes per light and a C20 glazed lean-to in the angle
with the main range. Some of the windows in the right return of the crosswing are
late C20 replacements.
Interior The roof trusses are circa early C20 replacements but 1 circa late C17
collar rafter pegged truss with a broken principal rafter exists below the new roof
over the hall and a second similar truss has been truncated above collar level. The
hall fireplace has been partly blocked but the original jambs and lintel are said to
exist behind the present arrangement. 1 early C18 2-panel door to the first floor.
A remarkable slate sundial is fixed to the front of the house and dated 1737, "the
time is shown at all hours of the day at Jerusalem and Barbadoes, while noon tide
only is shown at Goa, Ispahan, Constantinople, Candia, Vienna..." (Crowley) and 7
other cities.
"Sundials in North Devon", Jeanie Crowley, T.D.A., 1957, vol. 89, pp 175-191.