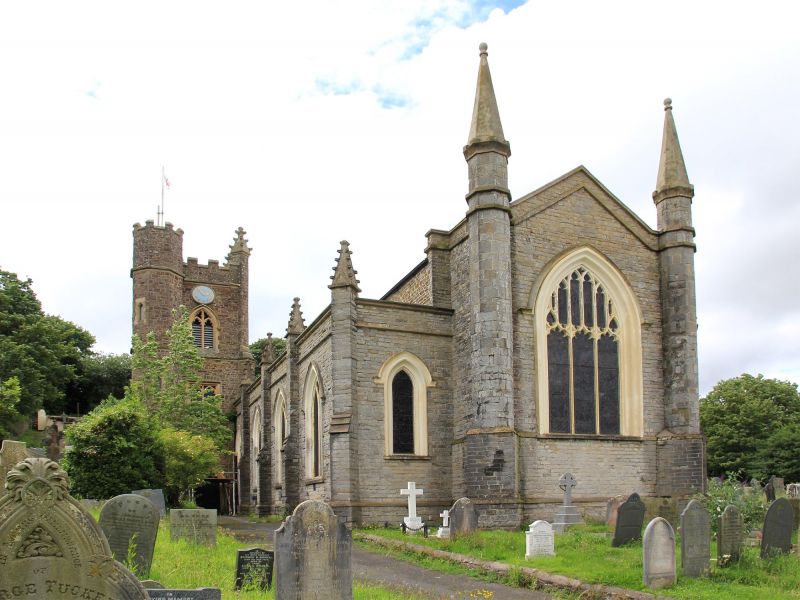 Exterior: Sited in a large sloping graveyard, the east front facing down towards the road and the Torridge estuary. The style is Perp revival of the Commissioners¿ type, the forms typical of the 1830s. The gable east front has a three-light window, with flanking turrets. Flat parapets to the aisles which are lower and set back, and have untraceried lancets to the east. The aisle windows have simple Y-tracery except in the westernmost bay which have more elaborate Perp tracery. Shallow buttresses at each bay, rising to stumpy pinnacles. The tower is obviously an addition from the non-matching stone and low, Perp, with a bulky stair-turret at the south-east and angle buttresses. Two-light windows, some of them square-headed, and an embattled parapet with little pinnacles. The gabled north-west porch (1909) has a four-centred doorway with naturalistic head-stops. The west end is cut into the rising ground, with a three-light window and a louvred three-light vent in the west gable. Narrow vestry between the nave west wall and the retaining wall of the churchyard.

Interior: The nave arcades have octagonal piers, moulded capitals and double-chamfered arches. The west bay is narrower. The good plaster vault of 1838 has moulded quadripartite ribs, and at the intersections big acanthus bosses which also functioned as ventilators for gas lighting. At the clerestory walls the ribs rest on cherub corbels. Flat ceilings to the aisles, with moulded cornices. The east ends of the aisles, i.e., flanking the chancel, contain the organ (north), and on the south a small chapel re-ordered in 1988.

History: A medieval chapel dedicated to St Anne stood near the site of the present church. In 1834 the Rev Thomas Mill of Northam, the mother parish, requested permission to build a new church, to seat 600. On Thursday 23 June, 1836, the foundation stone was laid. Consecration took place on 25 September 1838. £1,804-12s-2d was collected, with additional funds from grants and the sale of materials from the old chapel. The interior was reordered in 1899, with the seating rearranged to form a central walkway, new choir stalls, floor and decoration, and a small vestry at the west end. The architect was probably C.E. Smyth-Richards of Barnstaple, who provided plans for an ICBS grant application in 1897, and was ecclesiastical surveyor to the archdeaconry of Barnstaple from the 1890s. The intended enlargement of the west end by one bay and addition of a tower were carried out in 1909, possibly using the plans of 1897-8. Pevsner attributed all the alterations to John J. Smith of Bideford, who made (unexecuted) plans for a vestry in 1913.

Reasons for Designation: The church of St Mary, Appledore is designated at grade II for the following principal reasons:

* A 19th century church overlooking the waterfront in the shipbuilding port of Appledore.

* Perp Gothic of the 1830s Commissioners¿ variety, with some typical 1830s features including plaster rib vault and Y-tracery.

* Fittings and glass mainly of the late 19th and early 20th centuries, with local connections such as the chancel screen and rope decoration on the pulpit.