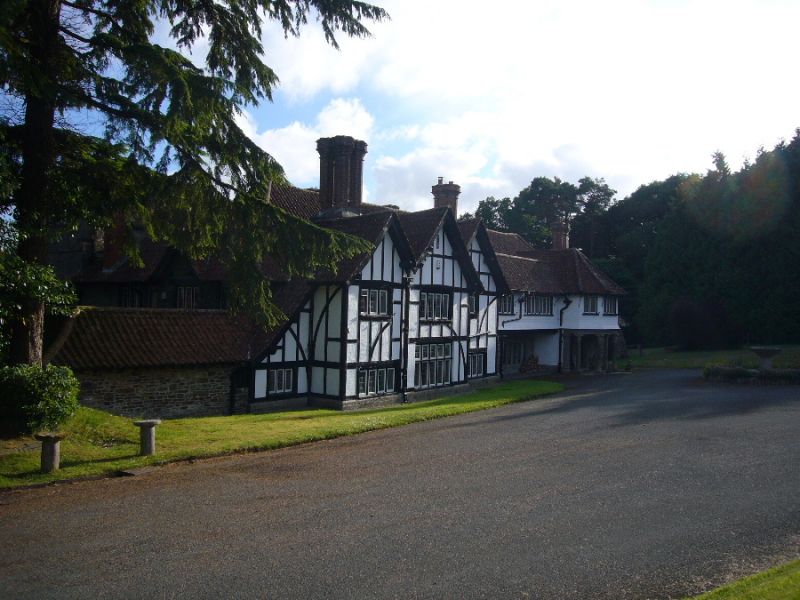 Eclectic Vernacular Revival style with a free use of C17 features in conjunction with an Italianate tower on the garden front and a rear loggia. Irregular plan under a deep roof with gabled projections to the rear, left end and front. Two storeys. Asymmetrical five window garden front with central gabled projection and a tower adjoining the front right corner. To the left of the front projection the facade is clad with timber framing, the rest, including the tower is stone rubble and granite.

The three-stage tower has lights with round-headed arches and raking angle buttresses dying into the wall. The tower has two louvered slit windows facing the garden and the top stage has lights with round-headed arches carried on colonettes. The main entrance to the house is at the rear under a first floor projection carried on stone columns with moulded plinths and bases forming a loggia under a canted bay and with tile hanging above. To the left of the entrance are three slightly advanced timber frame gables.

Interior not inspected but said to be complete and to have an interesting gallery feature.

Coombe Trenchard was originally the site of the Rectory which had fallen into dilapidation by the early C20 when Sabine Baring-Gould, squarson of Lew Trenchard, sold it to Sperling and built a new rectory closer to the church. The Sperlings were close friends of Baring-Gould and Henry Sperling financed the new pulpit in the church of St Peter in 1900. Dart and Francis of Crediton worked on a number of important buildings in Devon in the late C19/early C20 and were Caröe's chosen contractors for church work in the county. A photograph of Coombe Trenchard, circa 1910, exists in the Dart and Francis office.