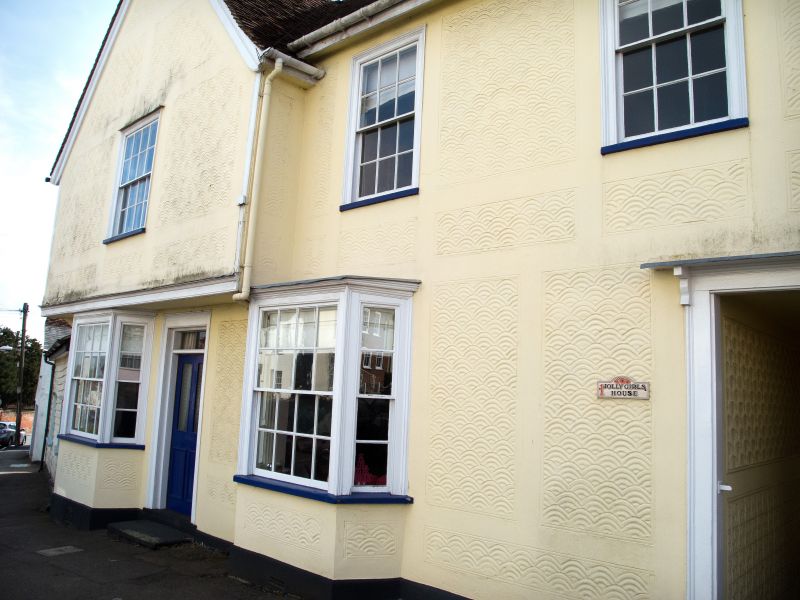 House, now divided into 3 houses, and shop to left. C15, altered in C17 and
C18, extended in C19. Timber framed, plastered, roofed with handmade red clay
tiles. 2-bay hall range facing NW, with two 2-bay crosswings. 2 axial stacks,
and external stack to left of left crosswing. C19 2-storey extension to rear of
right crosswing, and single-storey extension beyond, both with slate roofs.
C18/C19 single-storey lean-to extension to rear of left crosswing and left part
of hall range. 2 C19 single-storey shops to left of left crosswing, weather-
boarded with slate roofs, now combined as one shop. These form an obtuse angle
with the main elevation, following the line of Brook Street. 2 storeys with
attics. Left to right: The shop has one C20 casement, a pair of C19 casements
of 16 lights each, and a flush 4-panel door. No. 2, comprising the left
crosswing and part of the hall range, has 2 C18 splayed bays of sashes of 4-16-4
tights, the left one under the jetty of the crosswing, with one hollow-moulded
bracket exposed, on the first floor 3 C18 sashes of 16 lights, anti a C19
casement in a gabled dormer. One half-glazed door with plain light over, and
ufitry passage with C20 wrought iron gate. No. 3 has a similar splayed bay,
first floor window and dormer, and a 4-panel door with simple bracketed hood.
No. 4 has an underbuilt jetty, one C20 sash and 2 C20 splayed bays, and on the
first floor one C20 sash. Entrance in right return wall. The right wall of
this crosswing has at first floor level an C18 2-light window with one wrought
iron casement, original sprockets, and 2 gabled dormers in this pitch of the
roof. The interior of the left crosswing has on the first-floor an original
unglazed window with pierced tracery, blocked externally. It has a crownpost
roof, with cross-quadrate crownpost and 4-way bracing, slightly altered where a
hip has been formed at the rear, but otherwise complete. The hall range has
been raised in the C17 to align with the crosswings, and the roof rebuilt in
clasped purlin form. The right crosswing has double mortises for moulded
mullions, and grooves for sliding shutters, below the underbuilt jetty; a
steeply cambered and hollow-moulded mantel beam, the brickwork of the hearth
partly rebuilt; and a complete crownpost roof, with cross-quadrate crownpost and
4-way bracing, exposed in the occupied attic. RCHM 17.