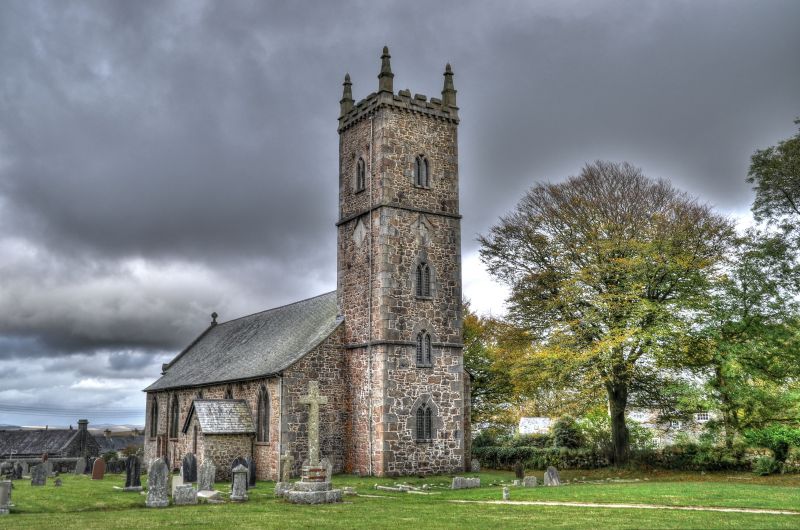 the entry shall be amended to read:

Church. c1810-14, by Daniel Alexander; chancel improved 1868 to designs ofR.M. Fulford; nave
arcades inserted, chancel extended and eastern bays of aisles added to designs of E.H. Sedding,
1898-1901; tower restored 1915 by Richardson and Gill. Granite rubble walls with dressed granite
quotas; gabled slate roof PLAN: west tower, broad nave of five bays with passage aisles created by
insertion of arcades by Sedding and chancel all under same roof; small NW porch and SE vestry.
EXTERIOR: Each side to north and south has granite 2-light windows with Y-tracery, Sedding
having repeated the original design in the added bays. Chancel with angled buttresses and 6-light east
window with cinquefoiled heads arranged in 3 pairs between mullions which run straight up through
flowing tracery to meet curve of arch, a typical Sedding motif West tower of 3 stages, divided by
plat bands and with Y-tracery windows, parapet on plain corbel table with corner pinnacles and
battlements; towards upper stage is quatrefoil set within a lozenge, probably for a clock.
INTERIOR: plain arcades inserted by Sedding, with round arches set on square piers. Fine mid C18
hexagonal pulpit, with figures of the Evangelists and enriched carving, from Church of St Sidwell,
Exeter (qv). Stained glass in east window by Mayer of Munich, in memory of the American
prisoners-of-war who helped to build this church, especially the 218 who died here. Various C19
memorial tablets, including one to Sir Thomas Tyrwhitt, d.1833, by Barry of Plymouth. With the
exception ofthe works to the east end, the exterior ofAlexander's church has survived intact. As
such, it is of great historical importance as a memorial to the French and American prisoners who
built it and as the architecturally most distinguished surviving building on the world-famous
Dartmoor prison site.

Church. Built 1813, architect unknown but reputedly prisoners-of-war from the
nearby prison (q.v.) provided the labour. Rebuilt in 1869 by Robert Fulford,
enlarged in 1899 by E Sedding and further in 1916 by Richardson and Gill of London.
Granite rubble walls with dressed granite quoins. Gable ended slate roof.
Plan: Nave, very narrow north and south aisles, chancel, west tower, north porch
and south vestry. The rebuild of 1869 included the addition of a sanctuary and the
tower was added in 1916.
Each side has 4 granite 2-light windows with Y-tracery. Vestry projects on south
side. Leanto to north porch. 3-stage tower. The chancel is narrower and has
granite buttresses on its east wall with a 6-light Perpendicular style window.
Interior: plain 3-bay arcades of square piers with round arches. No chancel arch.
Continuous wagon roof.
Source: Devon C19 Churchs Project