A Grade I Listed Building in Drewsteignton, Devon 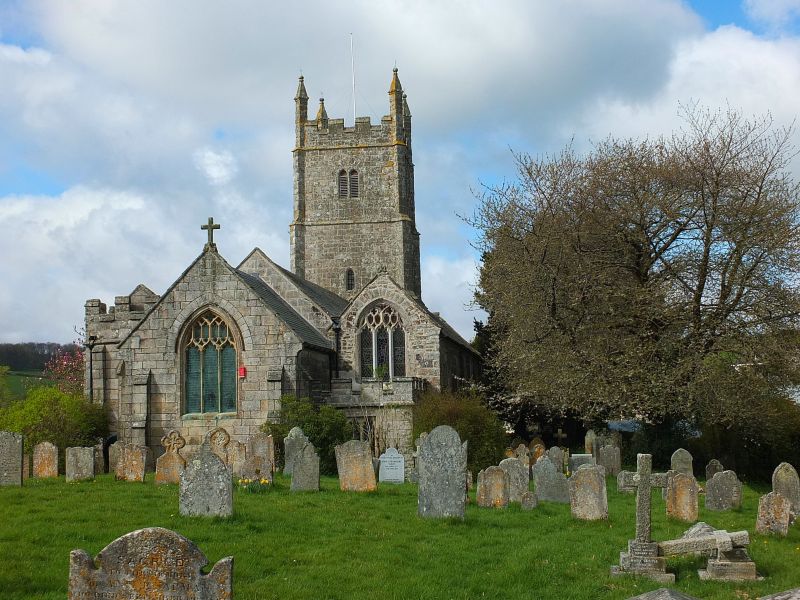 5/96 Church of the Holy Trinity

Parish church. C15 and early C16, chancel rebuilt with new vestry in 1863. Coursed
blocks of granite ashlar throughout but different styles to different periods; early
detail of granite and Beerstone ashlar, C19 Bathstone detail; slate roof.
Plan: C15 nave with lower chancel rebuilt in C19. North and south aisles, neither
of them full length; the north one earlier (maybe early C15), the south one late C15
- early C16 with contemporary 2-storey south porch; C15 west tower. C19 vestry in
angle of north aisle and chancel.
Exterior: tall west tower of 3 stages with diagonal buttresses and embattled
parapet with corner pinnacles. Internal stair turret in south-west corner. Belfry
windows are twin lancets. The west side has a 2-centred arch doorway with double-
chamfered surround. Directly above is a 3-light window with granite Y-tracery and
above that a C19 painted clockface.
The south aisle and porch have set back buttresses and a continuous embattled parapet. The porch set left of centre interrupts the 5-bay front. The 4 windows
are all 3 lights with Perpendicular granite tracery and plain hoodmoulds (another in
the east end). Porch has projecting stair turret in angle with nave left side. Its
outer arch is round-headed with moulded surround and contains C19 doors. Above twin
round-headed lancets with sink spandrels. C19 chancel is Gothic in style including
a 3-light window with Perpendicular tracery in east end. North aisle has original
coping to gables, set back buttresses and 5-window front of 3-light windows with
Perpendicular tracery and hoodmoulds with carved head label stops, another in east
end and west end is blind.
Interior: porch has flagged floor and benches each side. South door is round-
headed with double-chamfered surround and contains a C19 door.
Nave has restored but essentially original open barrel vaulted roof with massive
secondary strengthening crossbeams below. The north aisle has a ceiled wagon roof
with moulded ribs and purlins, good carved oak bosses and wallplate enriched with
four leaf decoration. The south aisle is similar but not identical and is now open.
The chancel has a C19 version, open with crossbraces. Tall, plain tower arch
springing from imposts. Moulded granite ashlar chancel arch is probably C19. Each
side of nave are granite 5-bay arcades. Both have moulded piers with plain capitals
but those to the south aisle are moulded Pevsner's Type A whilst those to the north
aisle are Pevsner's Type B. Tiny round-headed doorway in south aisle to porch stair
and north side of vestry has C15 2-centred arch to vestry. A monument in the south
aisle seems to blocking granite segmental-headed arch of former rood stair turret.
Walls are plastered and the flagged floor incorporates a high proportion of granite
graveslabs dating from the C15, C16 and C17 and C18. The earliest with inscribed
crosses and the best in the north aisle.
Chancel furniture and fittings are all C19. Sanctuary is lined with small field
panelling. Linenfold panelled reredos. Altar fronted carved with angels flanking
the Agnus Dei C17 - style oak altar rail. Gothic style stalls. C16 style octagonal
drum pulpit dated 1939. Brass eagle lecturn dated 1895. Gothic-style oak prayer
desk dated 1954. Gothic style oak benches dated 1931 with some C19 pine box pews in
aisles and rear of nave. One C15 oak bench end carved with blind tracery has been
preserved. Norman-style Beerstone front built in 1893, a copy of the battered
original now in the tower. Timber Gothic tower screen is a first word war memorial.
C17 clock movement to rear of the nave.
Painted arms of Elizabeth I over south door. C19 painted benefaction board to rear
of south aisle records a gift of 1541. Benefaction board to rear of south aisle
records a gift of 1541. North aisle has a pair of C19 painted boards recording the
Ten Commandments. West end of north aisle has another painted board recording the
Ringers Articles. A Beerstone plaque with moulded frame records the 1705
benefaction of one Thomas Hall.
Of the memorials the oldest, at the west end of the south aisle, is dated 1701 but
the name is illegible. The rest are C19, the best in memory of William Pensford (d.
1807) and his wife Mary (d. 1782). Some C19 stained glass.
Not only is this an attractive Perpendicular Dartmoor Parish Church but it dominates
the village and also can be seen for miles around.
Source: Church Guide (1986).