Middle Drewston Farmhouse Including Garden Walls to the Front 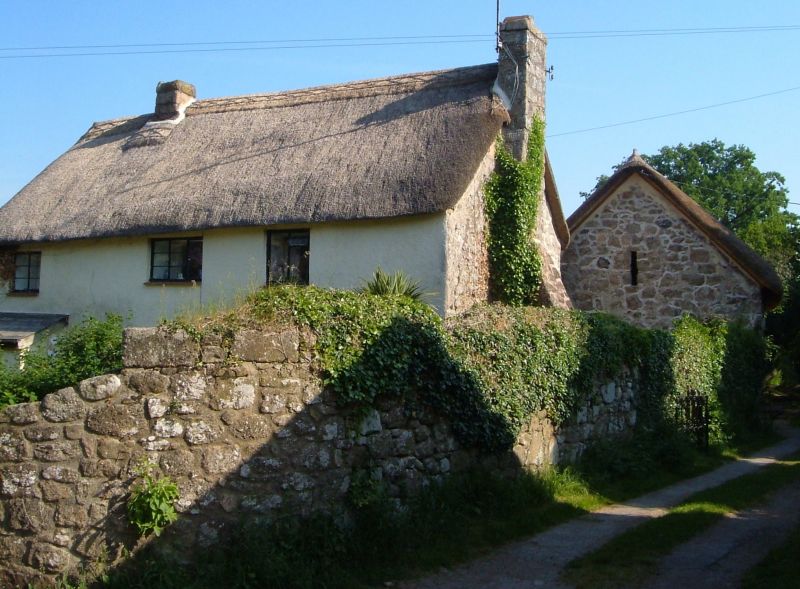 4/56 Middle Drewston Farmhouse
- including garden walls to the front

Farmhouse. Probably C16 origins but virtually rebuilt in C17 and early C18. C19
extension and shippon rebuilt circa 1960. Mostly plastered granite stone rubble with
large dressed quoins; granite stacks with granite ashlar chimney shafts; thatch roof,
corrugated asbestos to shippon.
Plan and development: 3-room-and-through-passage plan house facing south-south-west,
say south. It is built down a very gentle slope. The uphill end has an inner room
parlour with a projecting end stack. The hall has a large axial stack backing onto
the passage. The shippon at the left end was reduced in height circa 1960 and
converted to the present kitchen. The C17 stair turret projecting to rear of the
hall was enlarged to include a service room and new stairs in the C19. The house
probably originated as an open hall house but was so extensively rebuilt in the C17
and early C18 that there is no apparent evidence of any C16 fabric. It is now 2
storeys with the shippon reduced to one storey.
Exterior: irregular 3-window front with 2 extra windows to the shippon, all C20
casements some with glazing bars. Roughly central front passage doorway contains C20
panelled door and a monopitch slate hood. Roof is gable-ended. The parlour stack
has weathered offsets and is propped by a C20 buttress. The left end wall (to the
former shippon) retains a central slit window and a blocked drain hole.
Interior: most of the structural detail appears to be mid and late C17. Hall has a
large granite fireplace with an unchamfered oak lintel and a side oven. The
crossbeam here is soffit-chamfered with runout stops. (Maybe the hall was floored as
late as the early C18). Good mid C17 parlour has an ovolo-moulded and scroll-stopped
crossbeam with exposed soffit-chamfered and scroll-stopped joists. Parlour fireplace
is blocked. The C17 stair was replaced in the C19 but the double doorway off the top
landing is C17. The doorframes throughout the house, including the rear passage
doorframe, are solid oak but have no finished surround. Some C18 joinery. Roof not
inspected but the bases of straight principals can be seen on the first floor and the
A-frame trusses are believed to be C17.
Front garden is enclosed by tall granite rubble boundary walls and the gateway
contains a C20 wrought iron gate.