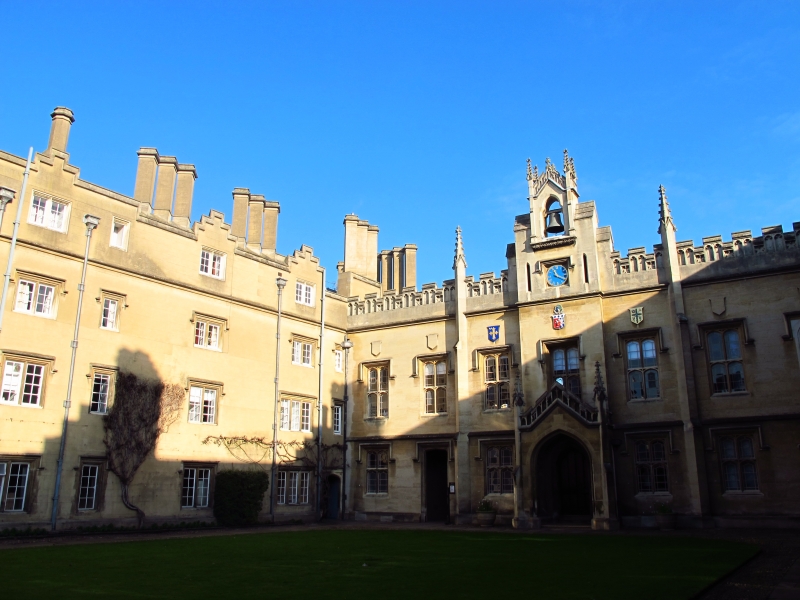 SIDNEY SUSSEX COLLEGE
1.
942
The Buildings surrounding
Hall Court and Chapel Court
TL 4458 NE 3/291
TL 4558 NW 4/291 26.4.50.
I
2.
The main buildings of the College were built in the year 1595-8 by Ralph
Symons and formed three sides of an open court. In circa 1628 a second
and detached block of buildings was built parallel to and to the South
of Hall Court. This range is at present joined to Hall Court by the Chapel
and ante-Chapel of 1780, thus forming Chapel Court also open to the street
on the West. The exterior of all those buildings was completely altered
into the Gothic taste by Sir Jeffrey Wyatville in 1821-33.
Hall Court 1595-8.
East Range with the Hall, the rest being three storeys, partly with attics.
The West side is symmetrical with a two storey stone porch in the centre
with three archways. Two and three-light windows with square heads. Turrets
and battlements. The interior of the hall was refitted 1747-50 when a
plaster ceiling was inserted, the original timber roof survives above it.
The moulded panelling is also of 1750, as is the screen which is Roman
Doric and of three unequal bays divided by pilasters. The staircase is
also of this date. The Master's Lodge contains fittings of different periods,
the Dining room has mid C18 fielded panelling and early C19 heraldic glass
in the bay window. There is also more C18 panelling and a number of C19
marble fireplaces. The Taylor library has the original wallcases and fireplace
of the Wyatville alterations in 1821-3.
North Range Late C16, heightened and a modelled in 1831-2 by Wyatville,
the cloister on the North wall was added by J L Pearson in 1890 (see Cloister
Court). One, two and three light windows. Four-centred doorways. Embattled
parapet and stepped gables. Stone oriel window of two lights on the West
end. Internally, the Fellows' Palour has mid-C18 fielded panelling and
plasterwork. There are several other panelled rooms, with some of circa
1600, some of C18. The staircases are early Cl9.
South Range As above, late C16, remodelled 1831-2. Wyatville completely
rebuilt the West end as a Gatehouse, ashlar, three storeys. Three archways
with four-centred openings, ribbed vaulted ceiling in the Gatehall. Three-sided
oriels on the first floor. Early C19 oak gate. The rest of the range
is of three storeys and attics with an embattled and gabled parapet. The
interior has few ancient features, one room of circa 1600 panelling and
two with mid C18 fielded panelling.
Chapel Court
East Range. 1776 by James Essex, but entirely remodelled in the Gothic
style by Wyatville in 1833 to match the rest. The Chapel was extended
by T H Lyon in 1910-12. The front to the Court is symmetrical in seven
bays, with the central three accentuated with pinnacles and the central
one set slightly forward with a projecting porch; this bay is ashlar faced.
The windows are of two transomed lights in four-centred openings. The
Chapel fittings are entirely C20 except for a few monuments, and the fine
altarpiece by G B Pittoni. All the Library woodwork is of 1776 and probably
designed by James Essex.
South Range, Sir Francis Clarke's Range. 1628, remodelled by Wyatville
in 1833 and completely gutted in the restoration of 1970. (RCHM.)