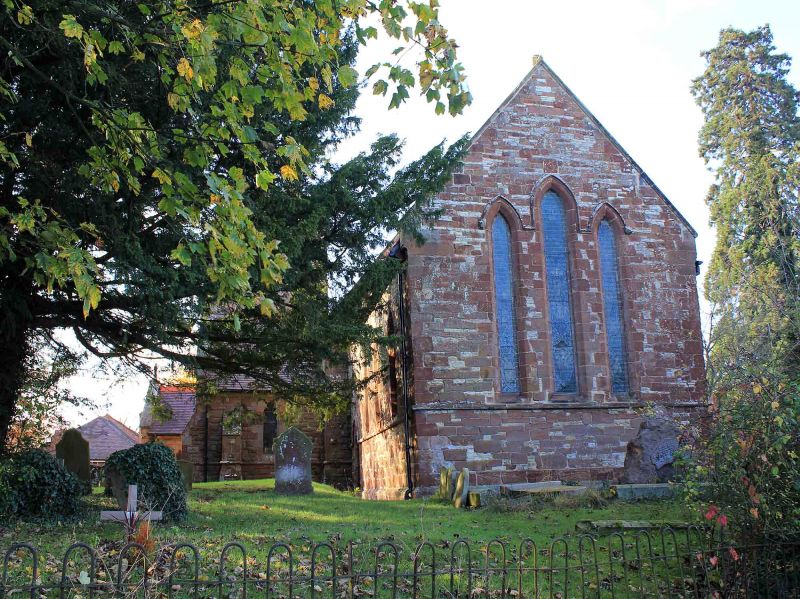 Parish Church. Circa C13 chancel, early C14 west tower, 1886 nave and south
aisle rebuilt in character of C14 work. At same time south porch and transept
added, and whole church re-roofed. Three lancet windows in east, north and
south walls of chancel and re-set doorway with trefoil head in south wall. The
transept has a gable with a chimney as a finial and is lighted by a two-light
tracery window on south and a single trefoil headed light on east. Between
transept and south porch the aisle is lighted by three lancets placed close
together. South porch has angle buttresses and a pointed entrance arch and an
ogee-headed window on either side. South door has pointed arch of C13 character.
North side of nave has two single trefoil light with pointed arches and between
them a plain two-light tracery window. West of the latter window is a doorway,
projected slightly from the wall as a gable with low buttresses to give the
appearance of a porch. The doorway has a trefoil head and a pointed arch. The
tower which is on the south side of the nave is divided by string courses into
three stages, supported by diagonal buttresses at each corner. Embattled
parapet with stair turret at SE angle and small turret at SW angle. Belfry
windows on north, south and west are of two-trefoil lights with pointed arches;
that on east side has three-trefoil lights with flat four-centred arch.
Interior: 1886 trussed rafter roof in chancel. On south side is a late C13
piscina. 1886 wagon vault roof in nave and 1886 chancel arch of two orders.
Nave arcade is in three bays in line with tower which form a fourth. The arches
are pointed of two splayed orders springing from octagonal pillars with moulded
capitals. Lofty pointed tower arch of 2 splayed orders supported on half
octagon responds.