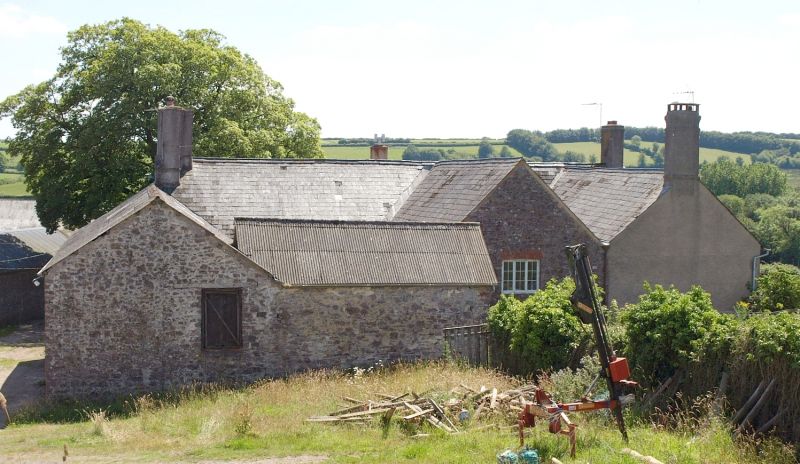 HOCKWORTHY
ST 02 SW
1/72
- Stallenge Thorne farmhouse
5.4.66 including rear courtyard
- II*
Farmhouse. Dated 1675, parts are probably earlier, and some early or mid C19
modernisation. Mostly plastered stone rubble, probably some sections of cob, and
the parlour wing is said to include brick; stone rubble stacks topped with plastered
brick; slate roof, probably formerly thatch.
Plan and development: courtyard plan house with an unusual layout. The main block
faces south-south-east, say south. It contains a 2-room-and-through-passage plan; a
large kitchen to right and a hall/dining room to left, both served by gable-end
stacks. 2-storey porch in front of the passage doorway. 1-room plan parlour block
projects at right angles to rear of the hall/dining room and it has a rear gable-end
stack. There is a second rear block parallel and alongside the parlour block which
appears to be part of the 1675 build. This double range forms the west wing of the
small rear courtyard. The other 2 sides of the courtyard are enclosed by service
blocks of late C16 - early C17 date. The east wing includes a through passage to
rear of a dairy. This dairy connects with the kitchen. The east wing also overlaps
the end of the main block but the angle there was later infilled by a small store.
Although the service wings of the courtyard are earlier there is no positive
evidence of pre 1675 work inside the main house. It appears essentially a single
phase house. However there have been some subsequent minor alterations. The passage
has been widened at the expense of the hall/dining room in order to accommodate the
early or mid C19 stair. The former stair is thought to have been in the inner rear
block to rear of the passage. House and outbuildings are all 2 storeys.
Exterior: is good quality, attractive and unusually well-preserved. The main block
(south) and parlour (west) fronts are virtually intact from 1675. The main front
has an irregular 2:1:2 window front of Hamstone windows with hollow-chamfered
mullions and hoodmoulds and containing rectangular panes of leaded glass. Only the
first floor window immediately left of the porch has been altered by the insertion
of a C19 casement with glazing bars taller than the original window there. The
gabled 2-storey porch is most impressive. It has a Hamstone ashlar round-headed
outer arch with facetted imposts and a fluted keystone under an entablature with a
pulvinated frieze and pediment. Above it is a 3-light mullioned window, and, above
that, the date plaque which has a modillion frame, hoodmould and is inscribed WC
1675. The gable has shaped kneelers, coping and an apex finial identical to that of
nearby, Court Hall Farmhouse (q.v). The passage front doorway is original and
contains an oak doorframe with moulded surround and urn stops with a particuarly
fine contemporary 12-panel door containing strap hinges with fleur-de-lys Tinials.
The main block roof is gable-ended to left and is hipped to right over the C19
addition. The parlour wing contains a single Hamstone mullioned window on each
floor. Other windows to the service blocks are C19 and C20 timber casements. There
is however in the rear block a first floor late C16 - early C17 oak loading hatch
doorframe into the courtyard.
Good Interior: and it is well-preserved. The kitchen is a large room with a 4-bay
ceiling of soffit-chamfered and step-stopped crossbeams, the last half beam well
proud of the kitchen stack, which is built of stone rubble with a soffit-chamfered
oak lintel. The kitchen/passage crosswall retains the remains of an oak plank-and-
muntin screen. There is a C19 stair in the passage. The hall/dining room was
originally of 3 bays, the ceiling beams are unstopped with ogee soffit-mouldings.
The fireplace here is blocked. The rear parlour is lined with bolection panelling
in 2 heights. It includes a blocked doorway from the hall/dining room with moulded
entablature. The inner long side wall includes a round-headed and backed crockery
cupboard with shaped shelves. It has a C19 chimneypiece and grate. This interior
treatment of the parlour could well date to 1675 but, if so, is a bit early.
Nevertheless, it is a very good example of late C17 interior decoration and the box
cornices on the crossbeams are contemporary with the panelling. On the first floor
the kitchen chamber fireplace has a bolection-moulded chimneypiece. Otherwise there
is C19 joinery detail on the first floor except for the base of straight principals
to the roof trusses; their scantling is large enough to suggest that 1675 A-frame
trusses are there in the roof. The northern and eastern wings appear older: the
former is now open to a roof of A-frame trusses missing mortise-and-tenon collars
and including an oak crank-hoaded doorframe at first floor from the east wing which
includes soffit-chamfered and step-stopped crossbeams.
From the left end of the front a C19 garden wall, built of stone rubble and
including a garden gateway with stone rubble gate posts surmounted by Hamstone ball
finials drops down to a terrace revettment as it returns across the front of the
front garden.
Stallenge Thorne, mentioned as Stanlinz in the Domesday Survey, is one of the most
attractive farmhouses on this Blackdown Hills border with Somerset. Furthermore it
has a most interesting plan and layout with high quality interior features.
Source: Devon S.M.R.